Submitted by WILL THE ALMIGHTY 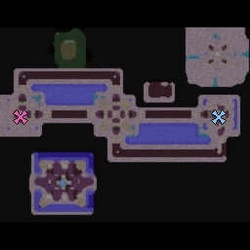 Author(s):
WILL THE ALMIGHTY


This map has been submitted here before. It has been enhanced quite a lot. Recently it was in the map testing, the new version is here.

This is an AoS. There are 14 heroes, all custom. Each has three normal abilities with 5 levels, and one ultimate, plus one innate passive. Maximum 10 players. no red and blue players. It is supposed to be simpler then others, but still feel apreciable and polished.
How it has been enhanced: at first I had what? 8 heroes?, no items, no battle, no random events, a hell of a lot of bugs. Now there are 14 heroes, no bugs that I know of and much more.

The lanes here are smaller then other AoS\'. If this bugs you simply buy a rune of teleportation. VERY useful. Items are bought at the fort.

Instead of a fountain, there is a healing circle, if you are hurt it will heal you completly. I always found the fountain too slow. If you don,t like it, I\'m sorry but this will always stay.

One kill = one gold. One hero kill = 3 gold. You get paychecks every few minutes. With this you can buy items, like compact towers and tomes (no, they don\'t screw up balance) or mercenaries.

If your hero dies, which will have to happen someday, and that enough game time has passed, your golem\'s spirit will leave its body and respawn in the center of the map. The spirit gives you simple abilities to help your teammates or slow down enemies. But, you have to buy the abilities first at your vault of spells, located inside the graveyard.
At least now you have something to do after you die.

FEATURES
14 heroes:
-12 regular heroes: Flesh, Sphinx, Corrupted, Mechanical, Steel, Arcane, Coral, Lava, Rock, Chaos, Frost, Death
-2 sercret only heroes: Nature, Lightning
-random events like creeps damaging you or secret quests.
-final hero battle after 30 minutes of normal fighting
-custom models, all made by me. The most noticeable ones are the teamcolored golems, the arcane golem and arcane burn, the rocket model, golem missiles (for sphinx, fire, lightning and nature), frostgolem, deathgolem
-Graveyard and spirit system. 7 abilities to buy and use.

By the way, there are no JASS abilities, I don\'t do that unfortunatly. But honestly, I wouldn\'t have done it anyway, this map is simple.
And I\'ve worked on this map for a pretty long time and I fail to see what I could add. Of course, go ahead and point out bugs, give suggestions and I\'ll think about putting them in. This only means I\'ve temporarily run out of ideas. I\'m also thinking of making a CTF.
Contents
Reputation Statistics
Show Ignored Content