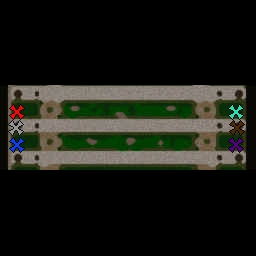 A very simple map that I created in 2012. Sometime between 2012 and 2014 i created v1.61 but never released it on epicwar. I improved the map in 2014 with v1.81 and have improved it further in the last 2 days and have also decided that the map is in a state that i can release it onto The Hive workshop.

-- QWER ASDF ZXCV hotkeys for everything that require it.
-- A fastmode to allow for a quicker game - text based.
-- Choice of 3 different amounts of total lives - text based.
-- Slightly customized UI elements.
-- An appropiate camera distance.
-- A way for you to control the other player on your team in the event that the other player leaves or you are playing a 1v1 game.
-- Unprotected to allow others to learn from it, includes basic trigger comments.

Information about the Map:
You have to use the gold gained from the death of your own zerglings to improve them and make it so they reach the end of your lanes and reduce the other teams lives to 0.

Their are 3 buildings availible to the player, 2 of which have access to upgrades.

The Zerg Hive is your primary building for upgrading your zerglings. From this building you can upgrade your zergs health, damage, armour and attack speed. You can also research 2 of the 4 available abilities or all 4 if fastmode is activated. The Zerg Hive has a splash attack that can be improved by upgrading it to a Zergling Hive Mind, which is also one of the prerequisites to access endgame upgrades.

The Zerg Death Tower is your primary defence building that has a multishot attack. From this building you can upgrade your towers attack damage and speed. It can also be upgraded to a Zerg Annihilator tower which has an improved multishot attack and is also one of the prerequisites to access endgame upgrades.

The Zerg Shrine is where you can research end game upgrades.

Changelogs for other versions can be viewed ingame.

- Fixed constant defeat/victory message at end of game.
- Fixed game not actually ending at the end.
- Fixed amount of lives on leaderboard not changing for each gamemode.
- Fixed Zerg Towers multishot having 1 more projectile than it should.
- Increased base damage of both zerg towers by 10.
- Increased base range of death towers by 200.
- Zerg hives now have a splash atttack instead of bounce attack.
- Slight changes to fast mode.
- Stopped Zerg spawning at end of game.
- Moved tower upgrades over to the towers.
- Other Minor Changes.

I will likely improve this when its not 2am.

Map Info View Resources In Use Preview Triggers
Reviews
11:13, 13th Jun 2015 Shadow Fury: The map is rejected due to a poor gameplay. I played the map for a couple of minutes and it got repetitive too quickly. I just keep watching my zerglings fighting and research any upgrade when I get enough gold...
Read full review...

11:13, 13th Jun 2015
Shadow Fury: The map is rejected due to a poor gameplay. I played the map for a couple of minutes and it got repetitive too quickly. I just keep watching my zerglings fighting and research any upgrade when I get enough gold. That's not very entertaining; you need to spice up your gameplay. Why not adding a greater variety of creeps? You can add Hydralisks, for example. Additionally, being able to control a hero with amusing skills would contribute to a more exciting gameplay experience because I'd not just watch my zergs battling but control someone and become an active player. In addition, it would help me to push one lane hardly by using some skills which would crush the enemy zergs or boost mines.

That's all I can recommend you to do. Please keep working on your map. If your map is rejected, it doesn't mean it will never get approved if you update it.

Maps 3
Thanks for the comments Shadow Fury, i have spent most of today working on adding a hero. Have to do a couple more things before i release it but once i do i willl be working on getting more heros into the map.
You must log in or register to reply here.