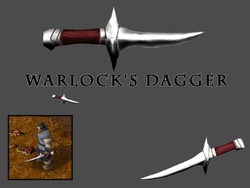 Well, my first scratch-made model, it's a warlock's dagger(aka Acolyte's Dagger). I've attempted to mimic a WoW item called "Acolyte's Dagger", using a screenshot as my background in Milkshape 3D.

A simple attachment of a dagger, that could be used for apprentice warlocks or necromancers, or perhaps for rogues, assassins and the like.

The texture is made by Zeverens, so don't you forget to credit him, too!

Give credits to me(Deolrin or Debode) and Zeverens if you use this model in your map. Do NOT redistribute this model in any way. I do not want to see it make it's way to sites like "Warcraft III Ultimate".