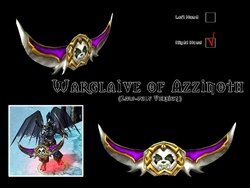 Third model made from scratch in Milkshape 3D, the second being a high-poly version.

"The Twin Blades of Azzinoth are a pair of weapons wielded by Illidan Stormrage. Azzinoth was a doom guard commander whom Illidan slew 10,000 years ago. Illidan took Azzinoth's twin warglaives and trained himself to use them. He has become exceedingly efficient with the weapons."

The high-poly version will be released as soon as FrIkY will finish the texture for it.

This is the right-handed version. The left-handed version of this model is also available on the Hive. This version uses in-game textures and has a total of 278 polygons.

If you use this model, give me credits. Do NOT redistribute this model in any way. I do not want to see it make it's way to sites like "Warcraft III Unleashed".