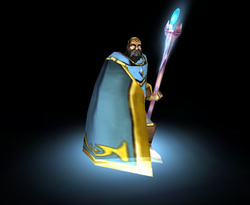 Few months ago...I guess a year ago I wanted to have a cloaked Mage from WCII and then this idea came to my mind. I also wanted this model to be a Khadgar from WCII but a fella had made one, then this arcane guy will be just a commom mage from the game.

FEATURES:
Even it doesn't seem to, the glow and the crystal sphere in the staff have Billboarded bones.

This model can be used as Hero or as Special Unit such as Kel'Thuzad (Necromancer) but If you're going to use as unit I suggest to change the Combat - Death Type to Can't Raise and Does Not Decay since the model does not have a Dissipate nor Decay Flesh animations properly good.