Tools 4 Maps 11 Tutorials 14
Introduction
Variables are places to store small amounts of data so you can use them later. They can for example be used for storing a players kill-counts, a players name, a type of unit, text-strings and dialogs.

Creating a variable
Most variables are made in the Variable Editor. To specify exactely how you want your variable you will have to set a type, a name, and a value.

Type
The type of the variable forms which data is stored in it. An integer is only numbers, a string is only text. Putting them together can mess up the game if you don't do it right.

Name
The name of the variable doesn't have to be anything specific. It's just a short string that helps you remember which variable stores what. 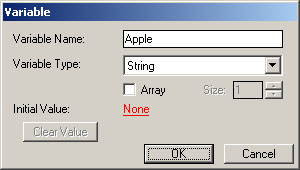 Arraying variables
Arrays are very useful to store many things in one variable. You can set the amount of arrays in the variable. I'd recommend just setting it to 9999 in the Variable Editor cause then yuo will have less problems trying to reach a high array.
To access the different values in the variable we use the variable[#] tag. So in our following example, Fruits[1] is Apples.

Let's use most unoriginal example. The one with fruits.
Then we can make a trigger that tells you these data:
This trigger will output:
Apples: 30

The following function does the same as the previous function, it's just faster and better.

Using variables
Now.. What should I do with them?
Here is a few examples of what practical stuff you could use them for:
A kill counter that each time a unit dies, it sets Kills[playernumber of owner of killing unit] and adds 1 to its value.

Then we can make a leaderboard with that:
This one sets up our leaderboard for all players.

This one is our Unit Dies thing again. This time I added the Leaderboard thing which updates the persons kill-count.

Maps 1
Guess I'll be the first here to comment

Then i Will be the second one.

Then I will be the third one then.

which trigger increase the number of a integer variables ?i i think i saw it some where but i can't find it now

B
Help with variables

My Leaderboard is messing up