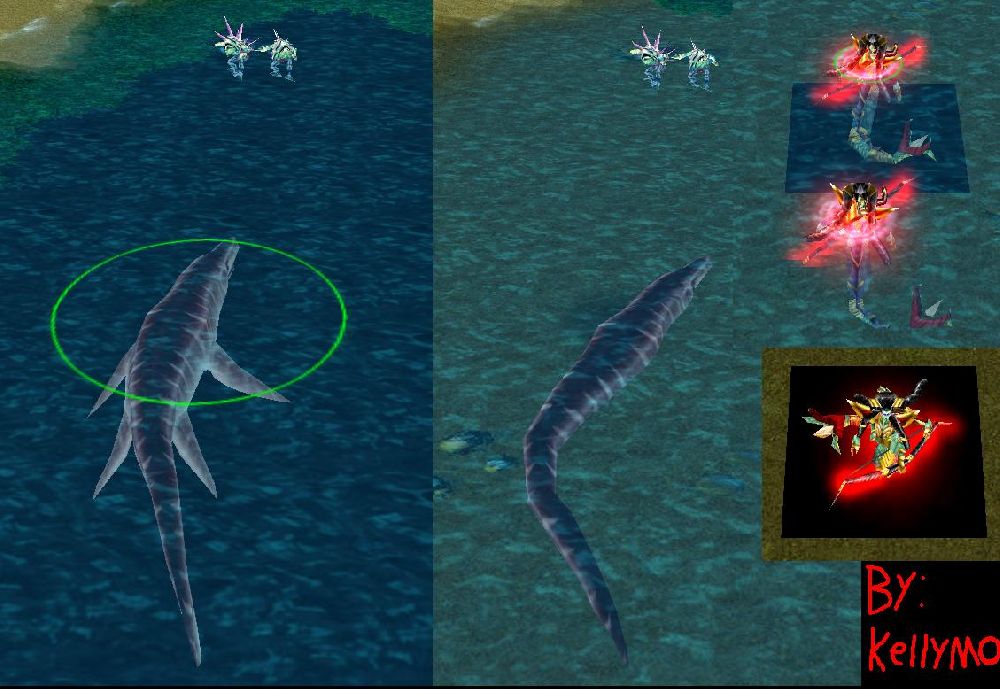 This bundle is marked as useful / simple. Simplicity is bliss, low effort and/or may contain minor bugs.
View usage Statistics Legacy download
Reactions: deepstrasz
This is My first Skin! and my First Ground Tile!

The way this works, is: you import over some ground texture any one doesn't matter, the only thing that matters is its not: a cliff tile, a basic dirt tile, or a number 2 tile (represented by the tiles picture as either a 1, or a 2) and don't use ''Sunken Ruins Dark Grass'' tile either, you need that as a cover up tile for the edges.

There are bugs to due with trajectory triggers such as:

in deep water, but not in shallow water.

but most large scale units cannot be fully submerged under shallow water without seeping into the ground tile underneath you're shallow water, and becoming invisible, such as OlofMoleMan's Mosasaur in the right hand side of the screen shot.

my texture, alphas out, what ever ground tile you replace it with. I will be building a tutorial of how to most effectively use this skin soon.

Ground tile underneath the main center of the map, I created a fully alpha channeled out version. to make large units be capable of being seen even when fully submerged, allowing for more realistic water.

THE CATCH: you need to use some type of alpha channeled over lapping terrain texture, such as: Sunken Ruins Dark Grass, other wise you'll see the gross black box that which this texture is.

ANOTHER CATCH: some units ''Amphibious'' animations such as the large naga Myrmidon, Royal Gaurd, and a few others, look weird in this shallow water with this tile underneath because blizzard is dumb and made their amphibious animations have there tails mutated into short stubby dumb looking things.

this texture allows you to make realistic looking shallow water, trigger friendly water, and at the same time not have to cover you're entire freeeking map in water doodads to have archery triggers and stuff. useful if you're map is 50% or more water like mine will be, but uses 3-Dimensional Trajectory Triggered missile spells like mine dos. if you're map has neither, then this skin may not be useful to you.


Credits to OlofMoleMan for his giant scary dinosaur as I would be forced to use some other lame blizzard unit for the screen shot. me for this texture, and both NFWar's and Razor21's maps iv linked as Examples. the maps are both very neat and both worthy of at least looking at once.

View in 3D
Reviews
00:59, 3rd Nov 2012 Kwaliti: This is a pretty old trick. There are plenty of alpha tiles across the forums, so no need for this in the skin section.
Read full review...

This is a pretty old trick. There are plenty of alpha tiles across the forums, so no need for this in the skin section.

This has been done way long ago. It's called the "MAT" (Might Alpha Tile) and has been used by terrainers and projects for some years now.

Models 51 Icons 1 Skins 1 StarCraft II Resources 1 User Interface 1 Tutorials 1
really? I didn't know Iv looked for it for a long ass time. like 2 and a half years dude. so if it exists please link it.

and I did feel obligated to share it once I figured this out independently all by my self without any body else's help... which yes, I did figure this out independently without any body else's help. so I uploaded this without knowing it was anywhere else, but if you say it is out there, then ok. I just wish somebody had uploaded it before I had, and I wish it was in the resource section. so that I didn't have to go through all this work for nothing.

why can't they upload it? why do I have to go look for it in threads that are closed and are like 2 years old?

and blizzard is kinda silly for doing what they did to the naga units, making the tails shrunk down for no reason at all. blizzard has pissed me off a bunch of times hence my anger at them and hence insulting them.

EDIT: ok everybody here it is, I looked for something like this: http://www.hiveworkshop.com/forums/...rtistic-style-using-mighty-alpha-tile-176544/

for 2 and a half years and never found it, but it was never uploaded so I could never find it without knowing its name. sorry for uploading this skin I guess.


EDIT: in case any body cares heres a tutorial I built as to how to not bug out you're 3-Dimensional Projectile Trigger System while still keeping realistic looking water: