The Doom Lord (For my Project CotE)

Icons 4 Maps 1 Spells 3
This thread, as the title stated above, is for my current project, CotE or Clash of the Elements (link in my signature).

Me and my good friend Doomlord came up with a lore that revolves around the immortal being, the Doom Lord.

Of course I had the idea thanks to him, and the Doom Lord actually will be (SPOILER) the final boss of the map I'm making.

He made the Lore first, then I continued it:


Defeated in a battle long forgotten, this nameless blood knight was banished to an astral realm for all eternity. Freed by the distortion of his prison caused by recent events, this ancient soul walked the land once more. Countless ages of experiencing unspeakable anguish and eldritch phenomena has left nothing but an insatiable thirst for death and destruction inside this spirit. Taking the only form that it remembers, this ethereal armor suit now marches out to quell the life of everything it encounters. Its cursed blade Diabolus tears the victim's soul asunder with a single strike. Those unfortunate enough to cross path with this monstrosity can only catch a glimpse of its demonic magics before they are blasted into oblivion. Warriors brave and strong enough to survive watch in horror as the creature abandons its humanoid form and darkness covers the battleground, sealing the fate of the mighty but foolish. Its unholy presence blighted the land, engulfing it in doom itself. The Doom Lord's crusade will not end, not until all life is extinguished from this material plane.

Once a hero whose deeds were recorded as legendary feats, this mighty warrior fell in battle with the Doom Lord and was forcefully revived as a soulless creature filled only with rage. In an ironic twist of fate, the former champion is now a loyal servant of his nemesis, fulfilling the Doom Lord's every whim with utmost devotion, and earns the new title of Doom Knight. Boasting an incredible brutish strength matched by none, the Doom Knight tears through enemy ranks with unstoppable momentum, pulverizing whatever blocking his path. A single attack of this creature can shake the earth itself and force entire armies to flee in terror. A beast that doesn't feel pity, or remorse, or fear; the Doom Knight awaits those foolish enough to meet him in single combat and face what can only be described as nightmare incarnate.

Whilst wandering the realm of the living, did he encounter a warrior that had power so mighty. The warrior wielded a sword that was mythical and legendary, and it was rumored too that the Warrior has not been defeated yet. The Doom Lord set his corrupted eyes on taking the life of the legendary warrior on that fateful encounter, and they fought each other for three days and three nights, until the Legendary warrior could not hold up against the mysterious, immortal body of the Doom Lord. But before the Doom Lord could entirely kill the warrior, the warrior grabbed his sword, held his breath, and wounded the Doom Lord's supposedly impenetrable armor. That was the first and only time he was wounded. By this time, the warrior has passed away, and the Doom Lord was the victor. Before he continued his endless journey, he tried to take the legendary sword for himself. But something was inside that sword that prevented the Doom Lord from touching it, and he also heard in his corrupted mind the sound of an Angel's voice saying: whosoever wields this sword, should he be worthy, shall posses the power of the gods. So, the part of the Doom Lord's soul rests inside the body of the legendary warrior, and he revived that warrior as an emotionless, dull creature, with the strength of a hulk. He erased all of the warrior's memories, and then sent him to the Nether realm, calling forth the warrior when he fancies.

The Doom Lord feasts on the souls of anything that breathes, and gains in strength by draining the energy of the every living-being. The Humans by now have considered the Doom Lord as a potential threat to all life, and therefore has formulated a plan against this monstrosity. The Humans sent many warriors upon the Doom Lord, sending armies of the most greatest and experienced men, only for them to return back barely alive, with some being mindless animate objects. Desperate on protecting themselves, mankind has surrounded their villages and cities with walls, enchanting those walls with magic in the hopes the Doom Lord won't be able to reach them.

Years pass by, and mankind has yet to stop the Doom Lord in his tracks. They figured the only way to stop something immortal was to seal it.
It cost many great magi their lives to seal the Doom Lord, and the sealing took place for 6 days and 6 nights, only on the 7th day was the Doom Lord weakened for the seal to contain him.

So there, they left the Doom Lord in an unknown region in the Barren Wastelands, sealed in an invisible barrier, awaiting the fearful time he awakes again.

[TD]
Now the Doom Knight is the warrior resurrected by the Doom Lord in his battle against the Legendary warrior.

Now, I want to continue the Doom Knight's lore but with my project and the Zephyr and life, I'm getting quite busy. It would really help if you could at least give me a prologue regarding the Doom Knight and the Doom Lord's journey.
[/TD]
If it would help here is a picture of the Doom lord: 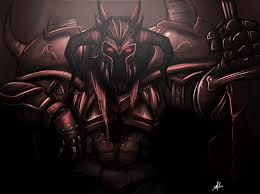 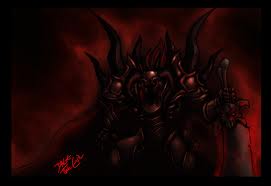 [TD]
Since you don't know the full story of my project and I asked you to create a story based on a story you've never heard of before, that would be unfair. I will try my best to create a lore for the Doomed Knight and...

I want your feedback regarding the Lore of the Doom Lord as posted above.

Maps 4 Templates 1
You two make a perfect match on making a great story. I stalked your conversation so when reading this I know the story already.

Hell_Master said:
You two make a perfect match on making a great story. I stalked your conversation so when reading this I know the story already.

Thanks for the complement!

Who on earth stalks another person's conversation with another person?! Who does that??
You must log in or register to reply here.

Altering the Battle of Mount Hyjal

People who like to kick Demon butts, get ready! Doom 4 is on the way!