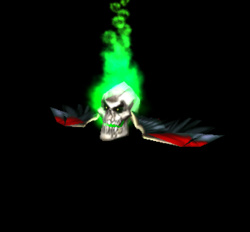 A new (and funny) addition to the Hive.

Meet my pet. He's a cursed Skull that flies and spits fire.
I call him "Bubbles"........ no really he's officially called "Bubbles".

If you want you can change the fire or the skull texture to adjust to your needs,
but if you want to change the model in general then you have to ask for my permission first to do so.
And don't distribute him.

Another thing: If you want to create a BTN/DISBTN for them then i encourage you to do so.

And before i say to much:

HAVE FUN WITH HIM!

-----05. March 2017-----
-changed the high of the Overhead Ref to be a bit higher
-added a Death Effect (The Leftover fire was because of another Emitter which Visibility was set to be 'linear' instead of 'none')
Contents
Reviews

HappyCockroach
The flying skull familiar. Really a great idea, and certainly useful. Two minor issues though: Overhead Ref attachment is too close to the head. Move it upwards a bit. Death atm is just reminiscent particles that vanish after few seconds. Give it a...
Read full review...