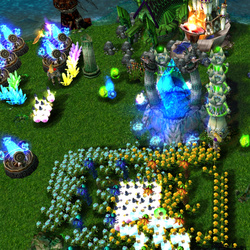 The story of the map gets slowly unfold during the game. Between waves, heroes can find items and do secret quests.

-Save system
-Credits are ingame

Option
This version is compatible with Warcraft III: Reforged. There are a few minor issues still but some of them are simply related to Reforged bugs.
The following problems have been fixed:
- Save system now works with Battle.net names. (Your old code works as long your name before the # symbol is the same.)
- Stacking issue mainly involving consumables have been fixed.
- Updated Discord link.

Option
Slicing Sprint and Crushing Jump abilities have been fixed and are now compatible with the newest version of Warcraft 3.

Option
---Message from the Developer---
Due to recent Warcraft III updates (1.30 & 1.31), Terrania received some new bugs. Two abilities (Slicing Sprint & Crushing Jump) caused the game to crash. There's no easy fix for this so I've temporally disabled these abilities.

---Bug fixes:---
*Iron Bar can be picked up again.
*Some issues regarding the Upgrade Mine ability have been solved.

Option
---Message from the Developer---
I had big plans but with the release of 1.29 & 1.30 it crippled map development. There are still some non-Terrania issues going on which is mostly sound related. I have however worked on some further tweaks.

---Finetunes/Changes:---
*Armor of Xy is replaced by Vest of Chi (including new stats)
*Intro and outro got a make-over.
*Kinetic Flash no longer causes a small freeze.
*Changed the order of Rank abilities for the Builder.
*Crystal Duplicator I now has it's own icon.
*Crystal Duplicator III model is slightly enhanced.
*Crystal of Clarity model is enhanced.
*Crystal of Clarity shows the amount of clarity gained when receiving it.
*Reduced collision (pathing map) of quite a few doodads.
*Aligned a lot of floating texts, mostly by applying the z-axis.
*Mana Shield is buffed.
*The range of Chain Healing is increased.
*Some minor changes.

Option
---Message from the Developer---
Another batch of lovely finetunes. I will finally address the combat aspect of the map in the next update. I've made some good plans for it already, but I just need to find the time and motivation to do it.

---Bug fixes:---
*Fixed a bug related to the -skip command.
*You can now learn skills from the School when your inventory is full.

---Finetunes/Changes:---
*The rank abilities of the Builder have been swapped around to make the Builder more useful early rank.
*Changed the hotkeys of the abilities in the Shared Spellbook.
*Moved the Brilliance Aura from the Shared Spellbook to the Hero.
*Increased level 1 and level 3 dispel buffs target area.
*Crafters will play two new animations during certain conditions. (Bag & Lumber)
*An earthquake will appear when a Crystal Dup III explodes.
*The death animation of the Dredge Mill has returned.
*The Forge now plays an animation.
*Changed the visual and audio part of Panic Rush.
*Slicing Spin can no longer hurt air units.
*Some minor changes.

Option
---Message from the Developer---
After years I've returned to release another update because I've discovered that there is an active Terrania Discord (discord.gg/5EPacmj). Although I don't have the time or motivation to do a complete overhaul of the map, I love finetuning it and that's what I've done.

---Bug fixes:---
*Fixed the two barrel explosions so they still work when the trees are unblighted.

---Finetunes/Changes:---
*All combat gear have their fonts styled and their stats better displayed.
*Fighter's secret ability is no longer a channel ability.
*Defender has a different secret ability.
*Cleric has a different secret ability.
*Cleric's Abolish Magic is replaced with Dispel Buffs and will level up in wave 6 to counter the golems.
*Walls that are under construction are dark.
*Walls that have been upgraded are more yellow.
*Damaged items are darker and have grey font color.
*Crystal Duplicator I and II have their own model now.
*Changed the repair sound and SFX of the Crystal Duplicators.
*Changed the Slicing Sprint sound.
*Unblight Plant upgrade, Seed Flower upgrades and Crystal Lamp upgrade have hotkeys now.
*Build <structure> have hotkeys now.
*Repositioned some abilities in buildings.
*Boss 8 Howl of Terror is enhanced.
*Level 1 & 2 Mine upgrade result in a different visual appearance.
*Moved the Rank 16 Aura from Shared Spellbook to Hero.
*Changed some Hero animations while it's casting certain spells.
*The School now has it's available skills at fixed locations.
*Some minor changes.