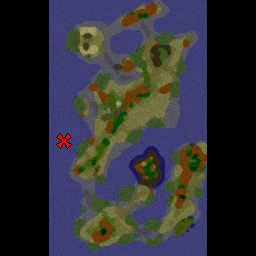 This bundle is marked as approved. It works and satisfies the submission rules.
View usage Statistics Legacy download
Reactions: Zeatherann
This is a terrain template, i added as much as i could doodads and made fine terraining. I think this is good for a Survivor, campaign or a short RPG. All of the isles can be accessed with a peon for example. There are 5 isles. I think this is very useful and saves time for terraining. This should be a small map so don't say it is small, it have to be small I will maybe make a beta template with like 256x128 size. But just maybe...

I added new some new doodads, changed terraining, moved trees and other doodads...

+Rep if you use this and just put my name somewhere in the Description or Credits!

Map Info View Resources In Use Preview Triggers
Reviews
17:12, 9th Oct 2009 ap0calypse: Approved Decent terrain, could be useful, but only for very small maps. Improve the description, though - you can read more about it in my tutorial: The importance of a Description
Read full review...

Decent terrain, could be useful, but only for very small maps.
Improve the description, though - you can read more about it in my tutorial: The importance of a Description

Maps 2 Spells 1 Templates 1 Tutorials 1
Well, the description is lame i think. Really, what more to say about a terrain template?

Bugbuster96 said:
Well, the description is lame i think. Really, what more to say about a terrain template?
Click to expand...

How about saying something about the terrain?
But you are right, the decription is quite lame.

Okay, so it isn't really bad... but I miss water doodads, since this is about 50% water/shore, that's not good.
Also, the cave (South) is weird... it's a cave that leads nowhere, it has no purpose in meaning since the island has been smoothly eroded, except for that small part - also, directly behind the cave is water, so it cannot go any further.
The cave also results in a use of blizzard cliffs, which is quite a shame for the rest of the heighered/lowered terrain.

The... erm... waterfall-ruins or something (North-West) is also entirely made out of blizzard cliffs with a few (random?) doodads (random apart from the waterfalls, of course).
You cannot walk there, see it, or enter the ruins, so in my opinion it's also quite useless.
There are too much stacked trees, the shoreline (mainly) exists out of a few rocks, shurbs and cattails,

The tileset isn't bad, yet in the mid-west part of the map (mix with dark grass and normal grass) it looks too static.

Generally, I have the feeling this could've been better.

Maps 2 Spells 1 Templates 1 Tutorials 1
You are right, but the cave to the south don't have to lead anywere, just like a hole in the cliff. And why not to use blizzard cliffs?

Bugbuster96 said:
You are right, but the cave to the south don't have to lead anywere, just like a hole in the cliff. And why not to use blizzard cliffs?
Click to expand...

Okay, it leads nowhere, but it's still a small cliff, while everything around it has smoothly eroded.
Can you honestly say blizzard cliffs look great?

Maps 2 Spells 1 Templates 1 Tutorials 1
Ok, now I am working on some things in the template, i will try to make it "Better".
I removed the "Waterfall" isle and added a new, and the cave to "nowhere" is now the cave to "Somewhere".
Cliffs:
They aren't great, but they're good enough for me, the Ruined Wall cliff is the best in this tileset.

Maps 4
While the terrain is above average (for most warcraft maps), its small. If you really want to be helpful, look in the forums, im sure their is plenty of people who would ask for someone to terrain their map. But feel free to expand on this map by making it much much bigger, because right now, its size vs. usefulness rating is like a 1, and this is only a 61 kb map. Make it bigger so their is an actual reason to use this.

Oh and for GODS SAKES post up some screen shots? Not that i say this in a cruel manner, and i say this kind of playfully: I don't understand how you can post up a map made purely for terrain, and have no screen shots of it.


So just fix these little things and this will be a worth while approved map.

Tools 1 Maps 3
Wow, great, can I get the permission to use it?

But could definently be two, or three times bigger. Would be more useful then

IS realy cool and useful, i go to use in my campaign.
Thanks!

Skins 2 Tools 1 Maps 5 Spells 6 User Interface 1
This is PERFACT for my minigame survival map (i love making minigames)! Thanks, your name will definitatly in credits quest.

BTW: blizzard cliffs are butt ugly, only if not used right, you on the other hand... used em awsomely! It fits well, 90% well, on any island in real life that has any size to it has at least 1 'cliff' in it.

Edit2: ERRORonly very small one) the murloc huts (i think) have a sound attached to them (the fire one), like i said nothing big

Maps 1
The terrain is average, and it looks a little unnatural like the shallow water passage ways. The islands aren't too lumpy, and you could add a little more doodads on the coasts. Could be very useful map for close up cinematics, 3/5.

Maps 11
Awsome map template
You must log in or register to reply here.