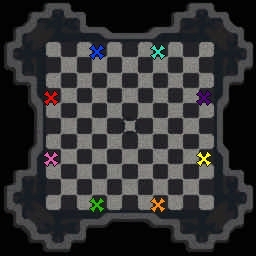 This bundle is marked as approved. It works and satisfies the submission rules.
View usage Statistics Legacy download
StarCraft ZoneControl is a Warcraft III map based on the original "zonecontrol" made in Starcraft. It is played by two to eight players. Four gamemodes exist; in the normal gamemode, Free For All and Simple gamemodes, the objective is to destroy all opposing bunkers. In the King of the Hill gamemode, you win the game by controlling the center zone for a fixed period of time.

Each player starts the game with a base consisting of a Command Center, Academy and Facory. These structures are respectively used to control, upgrade and reinforce your army. Depending on the gamemode, several upgrades will be available at the Academy. Most of these are focused on improving your most important unit: the Marine. In the simple gamemode, only a few upgrades will be available, simulating the game as it was in StarCraft. The factory can be used to construct special units in the FFA, KotH and Normal gamemodes. These units are: SCV, Ghost, Medic, Wraith, Vulture, Siege Tank and Goliath. In all the gamemodes, you can also construct dropships and marines there.

Aside from the main base, each player also starts with a bunker. Bunkers are the only means of expanding your territory. Marines periodically spawn from bunkers, increasing your army its size with every cycle. To create additional bunkers, you need Dropships - constructed at the factory. To take control of a zone, you must order your dropship to Land in the center of the zone. It will then descend and construct a bunker there, after which the bunker will start spawning marines as well.

Many people were involved in the creation of this project, the most important ones:

Angelusz:
Map Creator; created the triggers, loadingscreen, map preview, units and terrain.
Also created the website template, edited and optimized all of the models, created or edited all the icons and converted the soundsets.

DoomHammer:
Coder; Totally rewrote a lot of the code (into JASS) in my map and created new code for new systems. Also created/modified the ground tilesets.

Deaod:
Coder; Helped finishing up the code and rewrote some triggers to optimize.

Grrr post them as link not as single text

Check BB Code in my signature, you will find there all what ya need t create awesome map description!


JASS:
Above is example, copy that one to map description it will work

Maps 2
Does it matter that much? I'll change it for you <3

Spells 1
If anyone finds bugs, please PM me and I will fix them ASAP.
Known bugs (as of June 18, 2010):
1) Possibility of desync upon defeat in normal mode

Maps 2
Update: We did indeed get reports of occasional desyncs. We're currently working out this issue, a new version will be uploaded soon.


As a Reviewer of the Map Reviewers Group, I joined the THW Cleaning Event.
I end up writing a fast review, or just posting the end state of the map, rating is not always included!


Current State for this map: Approved


I will contact the moderator to Approve/Reject the map, depending on what you recieved.