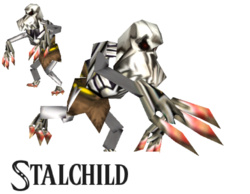 Hey! I made another model!

This model is inspired by the "Stalchild" enemy from The Legend of Zelda: Ocarina of Time.

"They are undead, skeletal creatures that seem to be closely related to Stalfos, except more child-like and unarmed. Stalchildren seem to be nocturnal, as they are only seen at night, and when the sun rises, they immediately disappear."

I'm pretty new to animating so please tell me any problems with the animations and the model.

Thanks to @Mister_Haudrauf for helping me create this model.

Please give me credit if you use him!