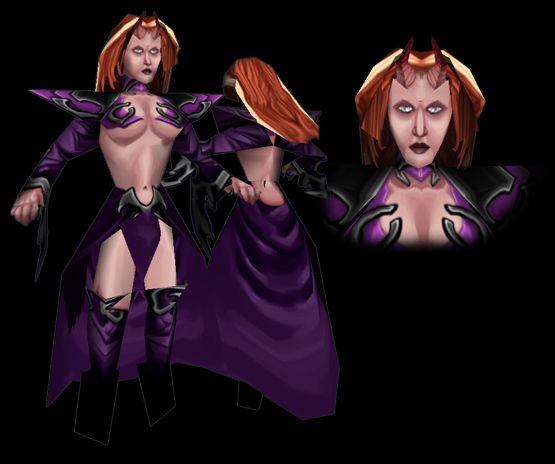 This bundle is marked as approved. It works and satisfies the submission rules.
View usage Statistics Legacy download
Reactions: ike_ike, Mechanical Man, CloudWolf and 1 other person
No, it's not a 5 minute texture, what I've been accused of submitting once.
I just am bored enough to not really attempt to give it more character.
EDIT: Imagine her hair is black in the picture, I was retarded and forgot to recolour it. [was originally that colour]

EDIT: Hey, Dio here! If you enjoy my work, a tip would be most welcome! Even a little helps a lot!

Reviews
10:58, 1st Nov 2010 I like the horns and the folds of the cloth on this, though the exposed skin is a little plane. Perhaps you could add some soft muscle tone. I've seen some pretty good eyebrow-less and horns for eyebrows demons, but they...
Read full review...

I like the horns and the folds of the cloth on this, though the exposed skin is a little plane. Perhaps you could add some soft muscle tone.

I've seen some pretty good eyebrow-less and horns for eyebrows demons, but they generally have really big horns that cross over the same place as the eyebrows. The horns on your skin are to high to really work as such, and considering she has all that hair on her head eyebrows could make the face look more pleasant. If nothing else the shadows from her brow ridges should be along her eyebrows would be, right now the shading gives her eye sockets a sort of sunken-in skull look. If you are going for a creepier look I'd recommend giving her more cloths.

With her lack of makeup and eyebrows the coloration of her lips seems to dark, I'd recommend getting it to a shade closer to that of her skin.

with how the horn/crown wraps on the skin it could allow you to give this skin a really defined widows' peak, which could be cool. I'd recommend painting the peak between her horns rather than using alpha for it though.

The middle of the nose (vertical wise) seems a little off. the shadows defining the edges should be softer and blend into the rest of the face more readily.

The lion-cloth part of her robe looks really plain, it would be nice if more definition was added to it. I think it takes the texture from the part of the bottom of the cape next to the boot. The link in my signature to the Warcraft Wrap Compilation project has the exact UV for her, though I'm sure you have access to other ways to figure out were the loincloth wraps on the model. It would be nice if there was more texture on it is all I'm trying to say XD

If you're going to have that much of her boobs showing you might as well have the top of her butt-crack showing at the top of her cape, it seems to be ridding low enough XD

also, you should lower the top of her cape around her waist a little if you are going to have that much of her torso exposed - it might help make her look more hour-glass shaped rather than triangular wedge shaped. (archer skins often suffer from the same phenomenon).

The hands look totally awesome, great job on those btw. Overall this skin has enough solid freehand content to be approved, though I do hope you work on some of the things I mentioned

Skins 1 Maps 1 Spells 18
the model itself is very nice but that face.... urgh

Models 3 Icons 34 Skins 17 Maps 4
wow :O Great job with the crown! Don't think i've seen anyone do that before

aaand.. boobs could cast shadow a bit down

Misha said:
she still needs a few more details.. give her brow ridges or a forehead bone crest..

aaand.. boobs could cast shadow a bit down
Click to expand...

Essentially this. The idea with the crown into bone ridges/horns is cool, but it looks like she just has some flaps of skin up there and the lack of real definition is kinda weird.

Misha said:
she still needs a few more details.. give her brow ridges or a forehead bone crest..

aaand.. boobs could cast shadow a bit down
Click to expand...

This. I have to say tho... not your best dio

Tutorials 4
Head and the crown parts wrap weird together - try adding something that will distract the views from it, such as hair, for an example?

Models 84 Icons 28 Skins 77
No substantial changes, but I do hope people will hate it less now.

Models 77 Icons 22 Packs 3
ya know, something as minor as that makes it much better.

The face is too ugly for my taste and it would of been better as a younger sorceress.

Tutorials 4
It's a skin, not model.

Models 1 Tutorials 1
It seems like you forgot to give her some kind of armor.