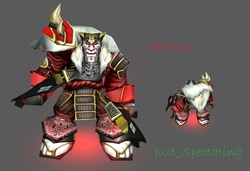 Another Japanese Faction Skin
This represents, The Shogun: [From Wikipedia] "A shogun (将軍 shōgun, [ɕoːɡɯɴ] (

listen)) was the military dictator of Japan during the period from 1185 to 1868 (with exceptions). In most of this period, the shoguns were the de facto rulers of the country, although nominally they were appointed by the Emperor as a ceremonial formality."