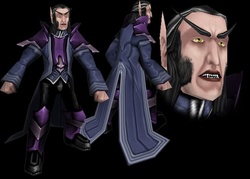 Woah, a new and fully animated model from me? No. It's not fully animated, just animations taken from the Eredar Warlock. I'm lazy.
Anyway, this is kind of a version 2 of my previous Sorcerer [mistakenly named 'Sorceror']
Model is scratch made, texture as well, while the UV map generally is similar to the Blood Mage's. Not all texture work for both, though. Model has no team colour. [attach a hero glow in-game, I wont add TC.]
Also, I tried to make the death animation as believable as possible, but meh.
EDIT: Made particles shinier.