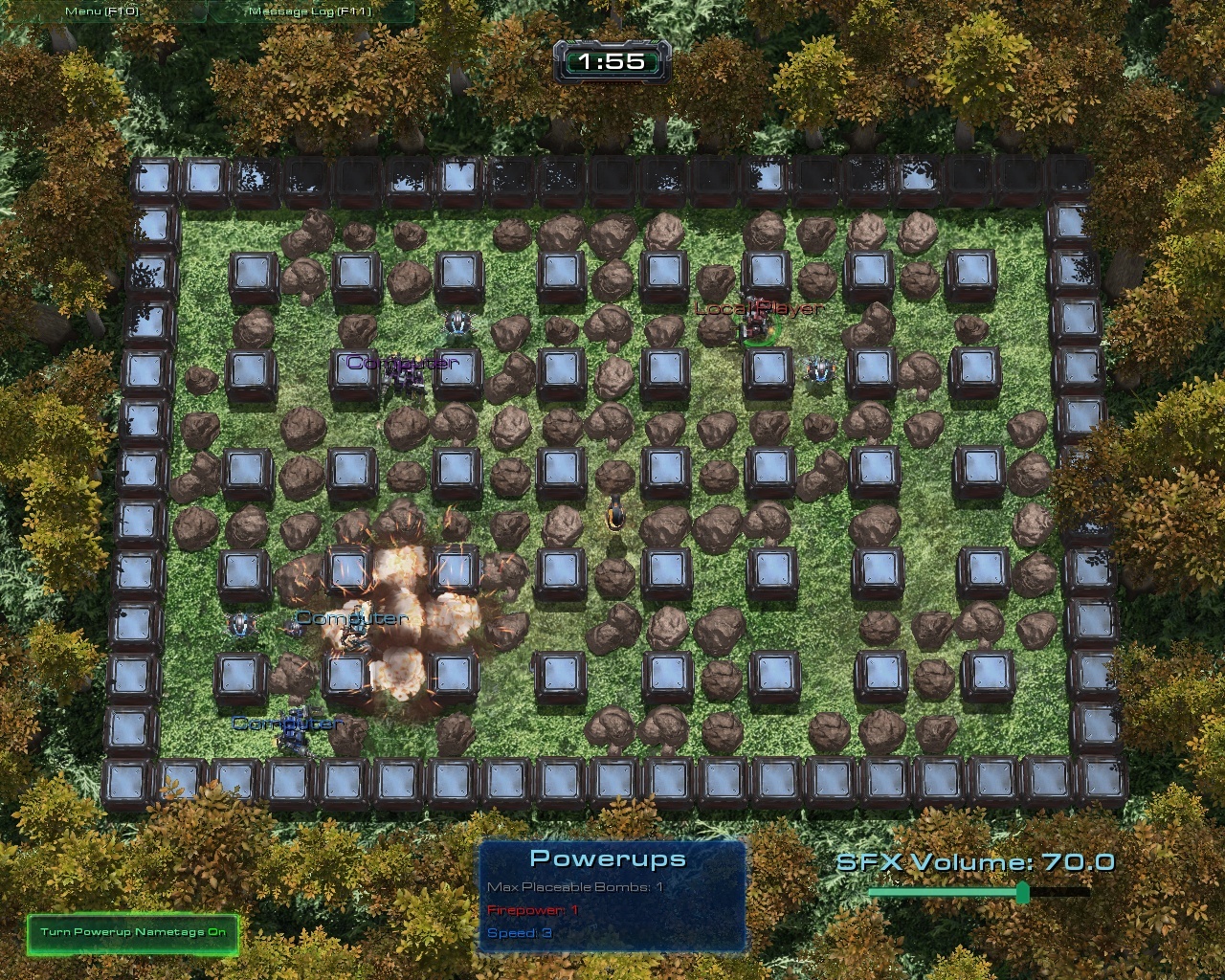 This bundle is marked as approved. It works and satisfies the submission rules.
View usage Statistics Legacy download
Reactions: Ralle
SCV Bomberman
There can be a max of Eight players, and this map can be played single player with the AI, (up to a maximum of 3 extra AI Players) just drag
SCV Bomberman.SC2Map onto SC2.exe (your desktop shortcut) to play single player offline, or look for the map online on battle.net US.

How to Play:
This map is based off of the Multiplayer Gameplay in the Bomberman Series: http://en.wikipedia.org/wiki/Bomberman (since alot of people dont seem to know what bomberman is...)
The objective of this game (and every bomberman game) is just to blow up your opponents, but first you have to create a path to them by blowing up the rocks.

To blow things up, just press either B, 1, or Spacebar to create a bomb under you, and after a few seconds, it will explode in every direction (that being North, South, West, and East), the length of the explosion is determined by how much Firepower you have (this is indicated in the blue window at the bottom of your screen).

When Rocks explode, they can drop powerups which you walk over to get their benefit:

Firepower: The more firepower you have, the bigger your explosions will be.
Max Bombs: This determines how many bombs you can place at one time.
Speed: How fast your character moves.

The last player standing wins each round, and they get one trophy, when they get 3, they win that game.

Move: Right-Click, like any other SC2 map.
Place Bomb: B, 1 or Spacebar.

Forest Arena: Nothing special, just regular bomberman gameplay.
Flood Arena: After some time, the arena will begin to flood with water, if you don't get the waterbreathing item (a warning is given when this item spawns), you will drown.
Temple Arena: Only difference is that there are 4 teleporters, which teleport you to the opposite side.

This map is published on B.Net US at the bottom of the list (or maybe not there at all). If you wanna upload it to EU or whatever you can, just give credit in the description.
Contents

Can I reprint this post to another forum for it?

i dont know exactly what you mean by that, but sure go ahead

Probably the same way you add maps to warcraft 3, find the maps folder, and drop them in there?

hugo802 said:
pls pls tell me how do u add custom maps to starcraft 2
Click to expand...

AuroN2 said:
Probably the same way you add maps to warcraft 3, find the maps folder, and drop them in there?
Click to expand...

To play sc2 maps online you upload them to battle.net using a feature in the editor.
To play single player you just start the map file with the sc2 exe file.

Not even close to how you play wc3 maps actually.

Icons 6 Maps 5
VIDEO PREVIEW OF THE MAP BELOW:

Always a fan of bomberman!|

6/5! Brilliant!!
You must log in or register to reply here.