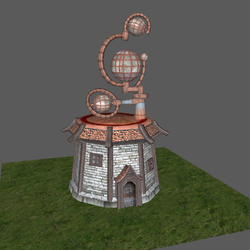 Originally created in 2013, recently raised from the dark cold abyss of my old forgotten file folders, and left in the care of Azsure, who took the time and effort to not only convert it to MDX, but also give it all the proper animations, including construction.

And a special thanks to General Frank for help and advice.

Feel free to use it with credit to Azsure and I, and leave your comments! Kisses!
Previews