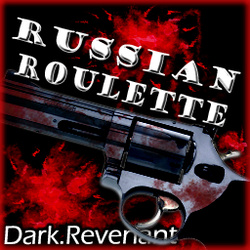 There are several features in this map that add to this game of shooting yourself. These include several different modes, variants, and such.

Default Variant - A variant of my design. You start with a pool of 6 bullets, and when the gun is passed to you, you can put in any amount. After you spin and pull the trigger, the bullets used are removed and the gun is passed. If you survive to lose all of your bullets, you are safe and have a chance to shoot someone in the method you would normally shoot yourself, using as many bullets as they have left. The game ends when everyone is dead or all of the survivors have 0 bullets left.

Shooter Variant - Like the default mode, only you have the option to shoot others instead of yourself during the game (replacing shooting someone after reaching 0). Shooting others uses their pool of bullets, however. You start with putting in a maximum of 3 bullets, but each time the gun is passed to you, you can put in 1 more than before. This is the most strategic mode.

Random Variant - Each round, a random variant is picked.

Cycle Variant - Cycles through the variants.


As an added bonus, a semi-hidden shop is available so that you can buy various drugs and alcoholic beverages. They all have slight gameplay effects and very noticeable screen distortion effects (drunk double-vision, meth vertigo, heroin spinning, etc).