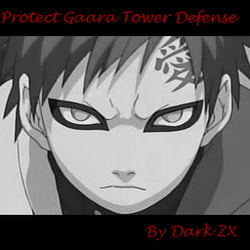 By DarkZX (Me, DarkZX Is My B.Net Name) and MiTal

(Note: MiTal made the original beta, I contacted him for permission to edit and he accepted, therefore he has passed the map onto me)

Ultimaa for his Naruto, Kiba, Rock Lee and A.N.B.U. Itachi Models
Demonye for his Gaara Model
Olofeman for his Japanese Cherry Tree Model
HappyTauren for his Demon Tower Model
All Respective Music Artists For Their Songs


Please Read Below For Advanced Details On The Map:

Explanation: Protect Gaara Tower Defense is a map that hosts up to 7 players (including the host).
In this map, its a free building map, you must build towers to protect gaara (who will, unless the host decides to move around the map which is a bad idea, be in the lower right corner of the map). You can either maze spawns, build massively powerful bomb fields, or use whatever strategy you want to protect gaara. Do not block, creeps will attack your towers if you do and it's not a fun thing.

Music: There are four songs currently in the game, the host can activate them by saying a command such as -track 1, or -track 4.
The songs are:
Shoot It Out by 10 Years
Hopeless by Breaking Benjamin
Ashes of the Innocent by Bullet For My Valentine
Metal Lance Theme by Fairouzens

Creeps: Creeps come out of four spawns on the map, the amount of creeps each wave varies, as of this version, there are 46 waves total, each wave gets a lot harder as the game goes on. Air levels can be extremely hard and (in quite a few games so far) can mean the end of the game, I recommend building anti-air towers so that Gaara won't die, trust me... BUILD ANTI AIR! xD

Heroes: In game you can get heroes to help you in your protection of gaara, there are several heroes to choose from, although most people like using either Naruto or ANBU Itachi. These heroes level up rather quickly even without killing enemy creeps. A hero can change the gameplay rather quickly from losing to winning.

I ACCEPT ALL IDEAS, CONSTRUCTIVE CRITICISM, AND OTHER THINGS AS WELL.
If You Find Any Glitches, PLEASE REPORT THEM IMMEDIATELY. I left the map unprotected so if anyone wants to look inside the triggers and help me find if there are any leaks, that would be greatly appreciated.