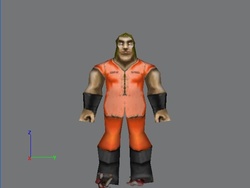 !!!THIS IS MY FIRST MODEL EVER!!!
Plz B Nice With The Comments D:

I made this for my zombie survival map

may seem like just a retexturizing,but i swaped the attack and work animations,cuz the attack anim didn't look sexy with attachments.Also,I made his pickaxe and the corpse he was supposed to carry around on the animation "stand flesh 1" and "stand flesh 2",also deleted the old attack anim.

About the retexturizing it is veeery simple,i know,all i did was recolor his clothes,remake the pants so they won't look like they're made of fish or snake hide (they had scales O_O) also made his bracelets/wrist guards/whatever look metalic,giving them a lead tone also made his skin darker so it would look dirty,cuz usually,people that spend long times in jail end up getting dirty.I made him brown-eyed and blonde,bcuz i felt like it ;D

it uses a custom texture the path is:
PRISONER.bmp

Did it all on GIMP and on my own

Moderator
22:20, 26th Mar 2009 shamanyouranus: The texture needs to be in .blp Dan van Ohllus: Rejected for the following reasons: Not much changes on the model. Only a new skin (which is in very bad quality) and that the corpse model got scaled down to...
Read full review...
Reputation Statistics
Page 1 of 2
Show Ignored Content
Page 1 of 2