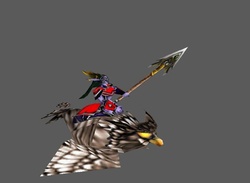 Just figuered out that i've no good Night Elf model so far, so i decided to make a new airborne one. I've made already a medium air units for Blood Elves and Undead, so i thought i should make one for Night Elves as well. This is the result: the Nightelf Owl Ranger!

Owl Rangers are medium, fast moving air units, mainly used for escorting heavier assault airbornes like Chimeras and for recognaissance, scouting and spying. Unlike the previously mentioned airbones, the Owl Rangers can perfectly hide themselves, sneak up unaware targets and put them down, as long as they aren't to strong. The major weakness of these aerial flight artists is that they're not armored. This fact makes them easy pray to huge creatures like Frost Wyrms and Dragons, except if they come in huge numbers. The main use is scouting and patrolling the own territory and fly back to the base for giving alert if something's wrong. They're also wonderfull messengers, due to their stealthy abilities and fast movement. Their damage is rather average, not realy something to get excited about.

I've also made a custom missile for it, as the original ballista missile from Reing of Chaos differs a bit.

EDIT 1: changed the sitting style and fixed a little odd movement issue on the mount's head.

Moderator
13:12, 2nd Apr 2013 Misha: thought to put a 'needs update' tag on this one, while you tend to those rigging issues in the posts :) okay her crotch/hip area looks deformed, you already made the legs too long, and that owl.. i dunno, you should...
Read full review...
Reputation Statistics
Page 1 of 2
Show Ignored Content
Page 1 of 2