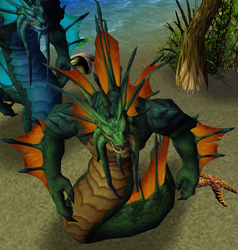 This is the HD naga male base model from World of Warcraft in 6 colors, ported by me. It is meant to have a weapon attached, and I've animated it so that you can give it your choice of:

I also posted a team-color version in a separate pack. I personally find the team color solution I finally settled upon to be a bit ugly, but some may want it anyway.

Feel free to give it attachments (weapons, team-colored shoulderpads, etc.) and create new models out of this.