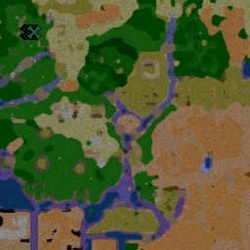 Middle Earth Risk is placed in Middle-earth during the War of the Ring. At the beginning each player gets random “towns” and tries to take as many countries as it’s possible. Each country in each turn brings new soldiers and gold. In Middle Earth Risk you concentrate on strategy and tactic – you don’t build any buildings but capture them from enemies.
One of differences between Middle Earth Risk and classic Warcraft is a high number of units (excluding beginning) which makes you have to be a general and a good tactician.
In the second hand the only way of growing is taking lands of enemies – but there are too many players to kill them in one frontal attack so the game is a high level strategy.

A game mode (Free for All, No Pacts, Ally, Alliance of 2, Teams of 2/3/4) determines if you play alone, with allies or with one or more team-mates. Current version of Middle Earth Risk offers sub-modes which allow to set on fog of war, set rules or change a period of turn or beginning resources.

The most important differences between Middle Earth Risk 8.1 and 8.02:
- statistics of fast ground units (including heroes) and beorning have been changed
- units possible to train are sorted by their price and type in each building
- not captured (neutral) towns formerly belonging to players who have left doesn't count to victory requirements (80/90/100%)
- in -to2, -to3, -to4 mode each slot not occupied by player is treated like a player who has left so one of teammates gets additional glory and income
- new command -hero: selects up to 12 of player's units ("heroes"), each worth at least a total 30 gold and points
- new command -alone that can be used in -ao2 by the player who has no possible allies. He gains additional income like he would have an ally who left the game
- players get the same number of points per round as before but now it is represented by additional Glory and simplier formula
- resolved problem with cave entrances and removed connected possible reason of desync
- time to pick the mode increased to 60 seconds of in-game time
- time to get ready increased to 15 seconds of in-game time
- time to pick the mode reduced to 50 seconds, added 10 seconds to get ready before the first round
- starting towns are randomized after choosing the mode and submodes
- while choosing the mode players posses no towns
- players whose second or third teammate left gain proper number of resources (-to3, -to4)
- if units and towns of leaving player aren't given to his teammate then they become neutral hostile
- mode and submodes can be chosen by typing few commands at once (ex. -ao2 -80% -g7)
- new submodes -i1 and -i2 which makes each turn 1 second/2seconds longer then the previous
- new submode -b10 which increases base gold to 10, base points to 2 and adds 3 gold to the first income
- new submode -g14 which increases start in the first round to 14 and income
- durability of Shelob doubled
- towns in Mirkwood renamed, another town trains taurdrims
- modified leaderboard: gold from leavers is included in shown values, team number is displayed instead of player number
- usage of "gray", "light blue", and "dark green" made possible
- Information (F9) and displayed messages improved

The most important differences between Middle Earth Risk 8.02 and 8.01:
- haradrim archer has proper armour type
- caves' entrances and exits cannot be blocked any more
- fixed bug that allowed to create several Dains at once
- minor changes in statistics of units with cleave ability
- some descriptions corrected and improved

The most important differences between Middle Earth Risk 8.01 and 8.0:
- Theoden statistics corrected (he's not so mighty any more)
- Sauron's aura corrected (doesn't effect enemies any more)
- descriptions of units and abilities corrected

The most important differences between Middle Earth Risk 8.0 and 7.92:
- remade systems associated with taking control over towns
- remade the system of starting towns randomization to complete randomness with equal number of towns per player
- system limiting number of heroes remade
- gate system fixed
- units do not stuck in water any more; ford moved under the Osgiliath bridge
- cave transitions moved a little, trigger replaced by more optimal, air units cannot get into the caves
- flying units rebalanced; they cannot capture towns and use gates/bridges any more
- tons of small changes in terrain and doodads
- 24 new models and many icons added; some changes in appearance of units with old models
- statistics of units with new models and few more changed and rebalanced
- Dead/Sauron/Witch King armour does not decrease damage to 25% any more. It has been replaced by the higher number of hit points and a faster hp regeneration
- sound of weapons changed
- Information (F9) and displayed messages improved

The most important differences between Middle Earth Risk 7.92 and 7.91:
- removed all known errors
- resolved all known problems
- removed all known memory leaks
- rebalanced catapults
- rebalanced heroes
- most of heroes is cheaper and weaker
- rebalanced long-range auras
- several units are a bit more balanced
- units cannot fire throughout walls of caves
- units spawned at the beginning are ordered to hold their positions
- command -share [player's colour] added which share control with your teammate and let him train units in your buildings (for your resources). Also -unshare [player's colour] command added. If no colour is specified effects of these commands are applied to all of yours team-mates.
- new commands: -in (ignore neutral – your units don't attack Shelob and undead who is defending Path of the Dead); -an (attack neutral – your units don't ignore neutral creatures any more)
- time of creating unit depends of it's price in points
- remade Saruman, spying ravens ability added (appears in -fog submode)
- terrain overview changed a bit
- Information (F9) improved
- commands for the camera can be used with a space before a number
- some units' descriptions improved
- slightly improved visuals

The most important differences between Middle Earth Risk 7.91 and 7.9:
- errors fixed
- new commands: -color (let to see a list of players' colors) and -teams (let to check who's teamed with whom in -ao2 mode)
- terrain changed a bit
- Information (F9) improved

The most important differences between Middle Earth Risk 7.9 and 7.81:
- removed possibility of crashing the game by long-range units (they don't jump into the circle automatically)
- resolved problem which turned towns into neutral
- fixed other errors
- special points renamed points
- very big changes in descriptions of units, auras and abilities, information (F9), text massages and hot-keys (added and adjusted)
- rebalanced units with damage reduction (strong body, robust body), cleaving attack, heroes and few other
- conditions of victory set for every mode
- -np (No Pacts) mode
- -ao2 (Alliance of 2) mode where everyone can choose one team-mate during the game
- red chooses a mode and sub modes while a minute after which the game begins
- sub-modes: -g7 (begin gold = 7, begin points = 0), -rules (no pacts out of team), -80% (win with 80% of towns), -90% (win with 90% of towns), -t45 (set turn time on 45 s) -t100 (set turn time on 100s)
- in the -np as well as in the -rules sub-mode red can kick
- in team mode when player leaves his income, resources, towns and units are given to his team-mate
- control is shared automatically in team modes
- palantirs in Minas Tirith and Istengard (-fog sub-mode only)
- nearly free control of camera's distance, degree and rotation
- new icon for points and Nazguls, 3 new models
- some changes in overview
- bridges work without errors
- if you start to rise/draw a bridge or open/close a gate you see a massage
- Shelob changed strongly – she doesn't move and can't be hurt by range attacks, player who defeat her gains 25 points (not 50)
- life-steal auras (except of Aragorn's) don't work for Dead
- heroes haven't web
- catapults are more expensive
- an eagle has an aura, the type of Witch King's aura changed

The most important differences between Middle Earth Risk 7.81 and 7.8:
- the server split does not happen any more (Maszrum from Arcane.pl helped me greatly)
- script optimization
- changed and added descriptions
- statistic of some healers and units with cleaving attack changed a bit
- some other found problems resolved
- small changes of overview

The most important differences between Middle Earth Risk 7.8 and 7.7:
- statistics of ALL units, hero, special abilities and auras have been balanced and remade according to the mathematics
- gates work properly
- changed taxes and spawns
- resources changed: Wood has been replaced by Special Points and Food by Glory.
- Special Points (SP) works similar to wood but SP gain per turn = (Glory+3)/4
- you don't need Glory/Food to buy a hero
- heroes aren't so mighty warriors as they were. Now they are useful only as a support (as it should be)
- no hero cloning. You cannot buy a new hero with the same name while the old one is still alive (ex. there can be only 1 Which-King same time), excluding Nazguls.
- 4 new heroes: King of the Mountains, Gandalf the Grey (plus new model), Gandalf the White, Black Rider
- new models, other visual changes
- changed sounds of armour (while hitting) of many units
- units and heroes changed for being more similar to LotR
- changed paths (walls are not able to be passed)
- 4 units added
- 3 units removed because there were an invention of MER's authors and don't exist in LotR
- new commands “-to X” “-from Y” which let you to make a charge into or from caves
- it's easier to use the bridge of Cair Andros
- a lot of small changes and fixed bugs
- Information (F9) changed, improved hints, thanks and credits

The most important differences between Middle Earth Risk 7.7 and 7.6:
- much more balanced units (about half of them was changed)
- gates and bridges works as they should (time is needed for opening and closing them, they are repaired only at the beginning of each turn)
- a ford added next to Osgiliath (units move really slow in it and aren't able to attack effectively)
- Moria replaced by Misty Mountains
- Mithril Mines replaced by Moria
- North Rohan replaced by Enedwaith
- West Rhovanion replaced by East Emnet
- lands of Harad renamed
- Brown Hills renamed Iron Hills
- gold and spawn system is partly changed
- 4 new units added
- undead dwarves removed
- 7 new models
- outlook changed a bit
- new hero: Aragorn (very effective against Deads)
- Thurin, called Dain, moved into Iron Hills
- few units renamed (Beregond called Faramir)