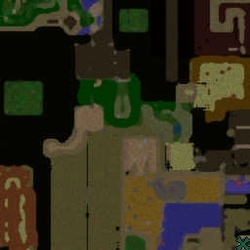 in this new game you used a legendary hero called royhan on this map you will notice many improvements and are leaving behind the hands of war maps 1 and 2 significantly improved the story. the map is a man named royhan who lost her loved by hades addition to killing his beloved also to royhan. royhan reborn in heaven, the objective of the game is down from heaven to hell to get to hades and kill him. In the game there are 3 types of players rebel resistance, the Allied resistance and the players (the game can be played by 2 players) and, finally, the game has a lot of mystery. Lots to think about why this map is called map puzzles and plenty of action. gold, and wood is not used, the heroes can level up to level 50 and 0 units move on foot.