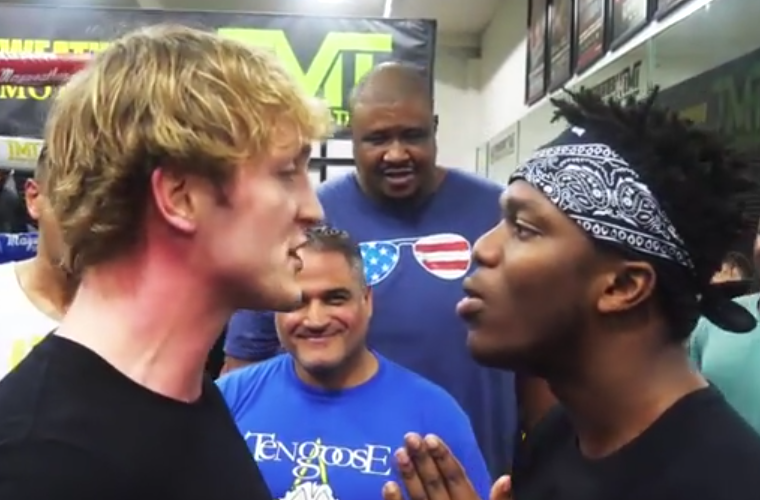 Logan is the sweet kinda boy we didn't deserve. He never really liked Chloe. He liked the idea of her. Same went with Chantel. He liked the idea of being a couple with someone, and he convinced himself that Chloe or Chantel could fill that role. He had lied to himself for a long time about his sexuality, and forced himself to invent feelings that were not there. A few weeks after he'd signed contract with KSI he had given up. He'd realized he'd never be straight. That it wasn't who he was. He however had himself convinced that he would probably die alone without ever having been true to himself. That was until he met KSI. KSI was beautiful. KSI's eyes were full of determination and unbridled ferocity. The way he carried himself wasn't that of the young face he had. It was older, more dignified in a way. KSI was everything Logan wanted his sister to be. He was dependable, he was a leader, he was beautiful, and Logan was very much attracted to him. KSI had known he was bisexual for a very long time. From the moment he turned 6 he knew that. Though after Seana he thought he'd never care about anyone again. That was until he met Logan. Logan was everything he could ever want. Except he was impossible to have. KSI wasn't sure what rules there were to the whole "eternal virgin" thing, and didn't know how to ask, because sometimes "eternal virginity" was very hetero normative. Also Logan was very much mortal and would get old and die while KSI would be stuck looking so young. That was until Logan joined the hunt. Which was kinda weird seeing as he was Roman. But it happened. Then Logan and KSI were super gay together for the rest of time because the "eternal virginity" was very heteronormative.

It was a cold Autumn night. Well, actually it was chilling to the bone as I was walking with Chloe in the local park. The sky was clear of clouds and rays of moonlight were scattered onto the pavement by the bare branches of the great oak tree laying unattended in the center of the park. Chloe had pressed herself against me as we strolled towards the bus stop. Only her frail voice could be heard in the quietness of the old park. My brand new sports car had broken down near the city centre, crudely setting us off with a hiss of the engine. I damned myself for never sharing my brother's interest in cars. I had always been more into feminine things, but I had tried to suppress that side of me, even when I was around Chloe. After my car had failed us I had texted my dad to pick us up, but to no avail, which didn't really surprise me. He's usually passed out this late. This wasn't the first time he was unavailable in my time of need. He had always seemed distant to me, spending more time with my brother.

We eventually made it to the empty bus stop. Midway through the park I had offered Chloe my jacket to stop her from catching cold, leaving me in just my light red flannel shirt. That's how I referred to the color at least, talking about pink had always made me feel uneasy of myself for some reason.

I was just about to turn to Chloe to ask how's she feeling when I caught a glimpse of an approaching bus. It was a red, double-decker bus which appeared clear of other travellers. It seemed that Chloe was in a rush to get out of the cold, as she wasted no time in getting inside. Before entering the bus myself, my eyes skimmed over the sight of late London night one more time. But then, I saw a dark, worn bandana on the ground. I decided it would be better if I picked it up. After all, it would've served no purpose but to be trampled on, had I left it on the paving. I reached out for the piece of cloth as something unexpected happened. My hand collided with that of the stranger. It was a man of about my age. I straigthened my posture as I was about to apologize, but no words came out of my mouth. I found my stare stuck in his moonlit eyes, which his dark skin emphasized in the night setting.

"Hey," he said with suspense, breaking my stasis. They will be having a rematch on 9.11. It will involve no head guards. KSI said in a video that Logan's team had insisted on head guards on the previous match. It'll be 3-minute rounds, 6 rounds total. It will probably end in a knockout.
You must log in or register to reply here.
Share:
Reddit Pinterest Tumblr WhatsApp Email Share Link
Top