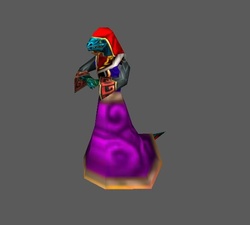 I'm quite afraid that i won't be able to finish my Lizardman Strider model befor i go on holidays, so i decided to make another one first, on where it was clear to me which ingame ressources had to be used. This is the result: the Lizardman Warlock. I didn't rly save any polycount, as i wanted to make a special, new-style lizard man. I know that there exist some on the Hive already, but i wasn't satisfied with the quality/use of ingame skins, so i made my own ones. In this particular mode, the majority of the body (especially the head were scratch made). It can also be used as an Argonian (from Oblivion).

The lizardman are a very special race by themselves. Despite to the popular believes, they aren't humanoids, but an own reptilian race. They also have some minor anatomical differences in their bodies, which make them resistant to immune against the majority of sicknesses. Diseases like the plague are a very serious matter for humans, orcs and such but not for lizardmen. They can also hold their breath for a longer period of time than humanoids, which makes them excellent divers. The lizardmen warlocks are very powerfull casters and they can be used for many things, even for assaults. They can cast harmfull spells at enemy troops, steal enemy magic and make it serve their own purposes and also summon fossilian demons from the ancient world. They neither have much armor nor do much damage with their standard attack, but they can utilize so many spells that these two drawbacks are just minor losses. Like all the other lizardman, with the striders as the only exception, they're rarely seen on battlefields. They usually reside at 3 places: tropical jungles and their isles, dry savannahs of the south and the aride deserts. They can live at cold places as well, but they mostly stay at hot, distant lands, where only few humanoid creatures have gone, except for Trolls. Surprisingly, the lizardmen and Trolls partly worship the same Gods and spirits. The Trolls are the only humanoids who have frequent contact with lizardmen, and the only race that has a friendly relation to them. The races that hate the lizardmen are mainly the Humans, Dwarves, Gnomes, Night Elves and especially the Nagas and Murlocs. In older times the Lizardmen, Nagas and Murlocs where partly spread at the same places, but after continuing skirmishes the Nagas and Murlocs retreated. Nevertheless, they still are the most popular slaves of the lizardmen.

Feel free to use this ressource in any imaginable way! Have fun with it!

EDIT 1: changed the deathsound into something more ''lizardish'' (the snap dragon), made the front wrap of the cloth a bit better (as much as is possible without loosing quality) and renamed the ''Stand Work Gold'' anim into ''Spell'' as was initially planned. The spell and stand channel anims are made on purpose to be similar, as it makes the model be closer looking to the original concept from Armies of Exigo. This is how about it performs ingames. The camera distance when the screenie was taken is bad, as it's slightly more far away than the standard ingame camera.

EDIT 2: changed the camera angle of the portrait a little bit.

Moderator
[img] [img] Misha [img] 4th Aug 2013 Moderator's Review: make his head wider, at least the back of it, snout can stay the same. rewrap his skirt better so it doesn't have that blur in front, or in overall. make 'stand channel' differ a bit...
Read full review...
Reputation Statistics
Page 1 of 2
Show Ignored Content
Page 1 of 2