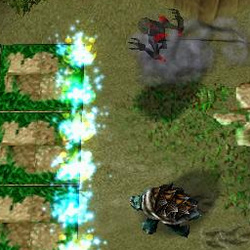 I am uploading this because a few people still play this sometimes, and there's no official place yet to download my mod.

This is a fairly old mod of Kolle's original jungle race that i infrequently update.

The aim of the game is simple and the game can be broken down as follows...

Aims:
- Be the first player to complete all of your laps.

Racers:
- At the start of each lap, you get a new random racer which probably has at least one or several abilities for you to use.
- Abilities usually cost mana but may damage, silence, slow, stun your enemies, causing them to get caught behind. Alternatively they might increase your speed or heal you, allowing you to finish your laps faster!
- When you reach the end of a lap area, your racer despawns, and you get a new racer in the next area.
- If your racer is killed by an enemy racer, you will get a new racer, but will start at the beginning of your current zone.
- There are 55 unique racers!

Evil Eye:
- Each player has a spellbook-style "Evil Eye"
- On Classic Mode, the Evil Eyes have Finger of Death, which allows you to kill any racer (including your own!) at the cost of 100 mana.
- Evil Eyes slowly regenerate mana, and gain mana when a racer finishes a lap, and some racers can even grant mana to Evil Eyes directly.
- On Advanced Mode, the Evil Eyes have several other abilities which enhance or hinder, such as Kill All (kills all racers) or Immortalize (makes your racer invulnerable).
- At the start of the game, evil eyes may be disabled by the host.


Although Warcraft 3 is very quiet, the minimum number of players i recommend is 5 to ensure there's enough interactions to keep the game interesting.