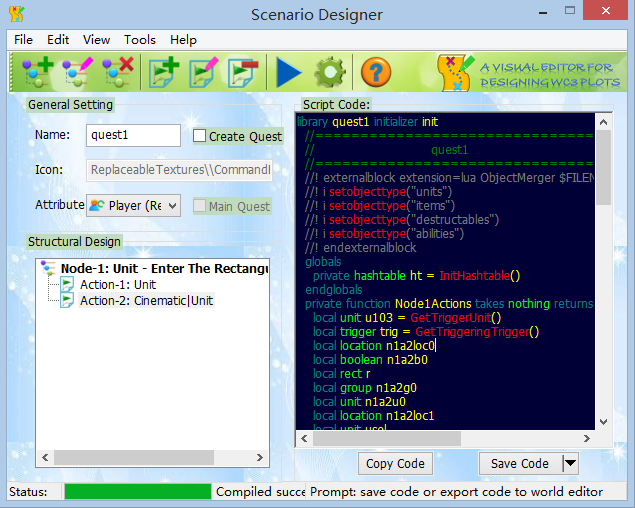 This bundle is marked as pending. It has not been reviewed by a staff member yet.
View usage Statistics Legacy download
Reactions: Original and deepstrasz
Introduction
The Intuitive Scenario Designer (ISD) is equivalent to a simple and easy-to-use lightweight world editor, Focusing on more efficient and visual quest and trigger functionality design. Users only need to use this visual editor to design the functions or task flow they want on top-level, without caring about the underlying script and debugging. The editor does everything for you.

Maybe you have dreams, but you don't have time and technology. Maybe you are building your dream, but are you exhausted by the endless writing and debugging of code. Facing the fast-paced urban life and work, whether your map project is delayed again and again?

Warcraft III provides map makers with a series of programming interface functions (APIs). These API functions are used to control almost all elements in the game. Naturally writing code is the core of map making. The emergence of Jass NewGen pack (JNGP) and Jasshelper enables cartographers to get a better code editing experience, which is similar to Microsoft Visual Studio. However, although the code editing is free, the disadvantages are also very obvious. The code still needs you to type in the editor one by one, and it takes a lot of time to debug. During this period, programming technology determines the length of time. Moreover, users need considerable programming technology and a lot of time consumption.

Another direction - code generation is forgotten. The reason why it has been forgotten for a long time is that this road is very difficult. It looks like thorns and it seems impossible. In fact, there is a lack of corresponding model to establish a relationship between user requirements and code. Gex’s map script interpreter (GMSI) is a good attempt. It transforms the editing of map code and object data into an efficient and simple script language. Users need to write simple GSL script code to edit map data. However, this kind of editing is far from meeting the requirements of map development and map code writing. In addition, users still need to write GSL script code.

Intuitive lab is a new script generator development kit, including effect designer, plot designer and AI designer. It enables cartographers to edit the map in an unprecedented way, and realize the visual and rapid editing of the plot, skills, AI, functions and UI of the map. You don’t need to know jass, vjass, Lua, or even Warcraft III. You don’t have to write code, check and fix syntax errors and debug, and directly generate optimized standard code with one click (stable, reliable and perfect).The cartographer’s remaining work is to draw the terrain (brainless), which greatly accelerates the development progress of the map project. The use of this software suite will make your map development fully visual design and improve the work efficiency, which is expected to be more than 800%.If you are a novice, it not only enables you to complete the development of map functions, but also surpasses the programming experts in efficiency.

Now, if you still choose to write code, you may be out of date. Imagine that the disaster 4 in the western world only takes one week to complete, the bloody Mission 2 no longer needs teamwork, and one person can complete it in two weeks, and the road of Destiny 2 does not wait indefinitely, but can be completed in two weeks. This makes it possible for a novice or even a child to easily surpass a programming master. Have you ever thought that a person can quickly complete the workload that used to take a studio a year in one week. How do you feel now?

Difference from GUI:
Using GUI is almost equivalent to using BJ API functions. It is essentially no different from writing code. However, although the intuitive lab is also a visual editor, it will not start from the bottom like the GUI. Users don’t need to care about data transmission and the implementation of underlying logic. The editor does everything for you. It allows users to make simple visual editing according to their desired functions, WYSIWYG.

By using a visual editor, users can generate script code and instructions with one click through simple editing.
The compiler has built-in logic check, which can detect logical errors and bugs in the project at compile time.
The plot editing results can be stored as project files, and the project can be opened, saved and closed at any time. You can share your project with your friends for free.
Unlike the Trigger Editor of the world editor, objects of irrelevant event response types will not be loaded, avoiding confusion for beginners. And these objects will drain memory intelligently at the end of execution.
It supports the nesting of triggers, so that the information of task triggering process can be fully visualized.
One click to export the project code or code file to the world editor and automatically create a trigger for you.
Unicode is supported, and the compiler supports jass, vjass, Lua and syntax indentation and highlighting; Support multi language version switching.

Create a new project:
Tip 1: If the compilation speed is slow, open [settings] and turn off the syntax indentation and syntax highlighting options.
Tip 2: Double click the node/Action, you can quickly open the corresponding editor for editing.

How to use code:
Click [copy code] to paste the code into the Trigger Editor.
Click [save code] to save the code as a code file and use jasshelper //! Import command.
Select the drop-down menu of save code - export to world editor to export the code to the world editor with one click.

The software is free and you can use all its functions completely. Donation is voluntary. Donation cannot compensate the author for what he has lost and the time and energy invested. It can be regarded as a consolation for the author’s hard work. It can also encourage the author to continue to update the software and continue to make other modules of the innovative Lab series.
PayPal.Me