Models 1 Icons 23 Skins 1
Recently been trying to submit icon packs that have intentional slight variations in them.
These icon must be in a pack too upload (not talking about the difference BTN, DIBTN)
IE skill tomes that have variations in levels too indicate spell or skill ranks.

I intend on making more Icons that have that these slight variations such as a potion being drunk bit by bit.

Why can't a upload direct as a pack, if i'm only allowed to individually upload them then add too a pack.
Why are they be rejected as individual icons if I need too upload them individually too add them too the pack.

The blank 'asset' link in the pack upload makes no sense, am I suppose to link the html of the icon of the individual packs in there? that I cant upload and get approved individually.

Also another pack I originally intended too upload as a pack of two was uploaded individually, I think the arbitrary pack rule of 5 while I see where its coming from makes sense to make it feel more full. pack rule is confusing if I wanted to make a icon pack of two and add to it later.

BTNGoblinBombspark will update,
Goblin BOOM
Also by the same logic these should be rejected as they a slight variation on each other, but aren't.
Last edited: Jun 8, 2019

Tools 4 Maps 10 Sounds 1 Tutorials 14
When you upload the first icon, you can hit edit and add other stand-alone icons to the same collection also known as a bundle. I feel like this is the right way to do this. Packs are for more separate things in the same theme.

Icons 65
The Packs Section was used to package a creator's resources into a neat and themed collection, and/or to make users download the alternatives with ease since we did not have the bundle system back in the day.

With the new bundle thing implemented, creators can put stuffs of slight difference into one upload without flooding the section.

You cannot add any bundle BEFORE the "first" resource is created, there is simply no way to do that. Only after that, users may use the Edit button from their uploaded resource to add bundle with the [Add Icon] button. This either needs to be improved, or be mentioned in the rules.

---
The [Assets] button from Packs are confusing at firsthand, you'll need to write the names of your uploaded resources there, then select them to add into your pack. 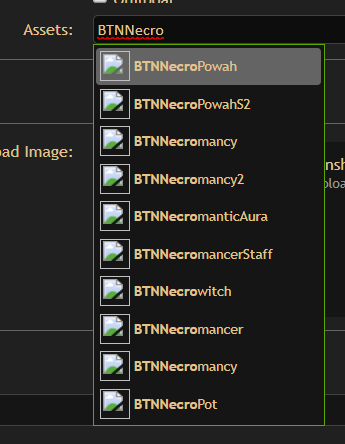 Oddly enough, it allows us to pick the other user's resources. Also all of the images are broken, ask Ralle.
Unlike the Leatherbound Tomes, the goblin's bomb set of yours obviously have different execution, I don't think anyone would call them slightly-edited, so bundling them to one is not necessary. By uploading them separately, you can to put them into a Pack later(if there are at least five of them, approved).

Some people may be using them the opposite way, but it serves the same purpose. Co-existing of both Pack and Bundle has in fact, blurred the lines.
Last edited: Jun 9, 2019

San said:
Also all of the images are broken, ask Ralle.
Click to expand...

Models 1 Icons 23 Skins 1
Ok thanks yeah I figured it out now and re-uploaded as pack. Editing and adding icon is easy enough, just a tad confusing at first.
You must log in or register to reply here.

Is there a problem with uploading icon packs?

Model packs, will it ever come?