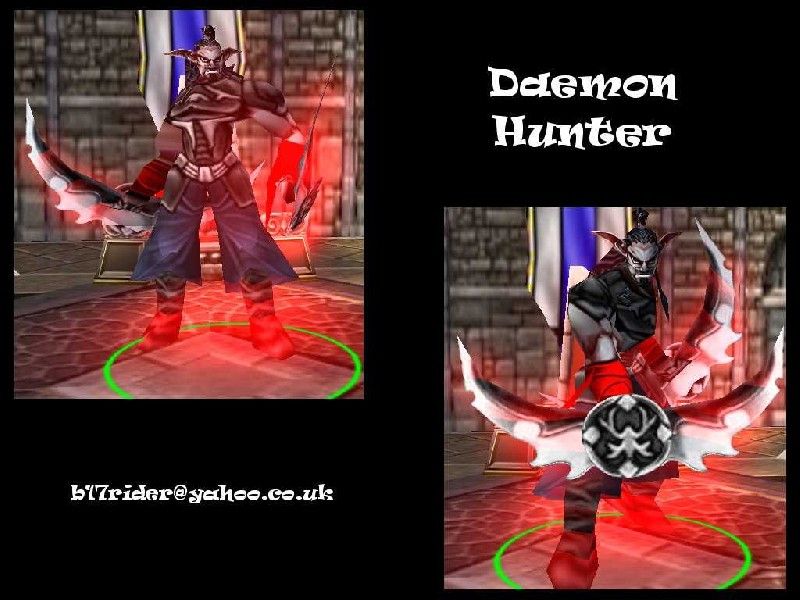 This bundle is marked as approved. It works and satisfies the submission rules.
View usage Statistics Legacy download
Reactions: Ićpomp
A Evil Elven Daemon Hunter with leather armour and no face mask...

Skins 3
Decent skin there. A few crits:
his eyes are somewhat off, they stretch too much on hish head. (and do not complain to me about the bad wrapping, if i can get the eyes right, then sure as hell can anyone else)
His armor is shaded like it was made of plastic
Try making some smaller sharper highlihgts on the edges of his armor, should make it more metalish

And gj on the face, only needs the eyes right.

Skins 5
looks pretty good, but one thing that would greatly improve the way it looks in the screenshot if you want to take pics in game like that. go to the team color setting of that unit and click match unit player or something like that, anyways it's the last one of the list. It should eliminate that bright red crazy light which distracts very much from the actual detail of the skin.

the demon hunter skin is one of the hardest models to do a skin for because of the face. the face of the demon hunter is very slanted and pointy at chin, if you know what i meen. 5/5 on this skin because you have give something to the demon hunter that not alot of people. great armor on bodie and the face is as good as its probably gonna get esp since your going to see him at a distance anyway.

Saikann - the eyes are supposed to be like that, and the armour is leather not metal or plastic...

EvilYardGnome - I realise this, however it is meant to be a hero, and setting the unit to be neutral (what you were trying to explain) wouldn't show the areas of team colour...

Thanks for the comments and the 5/5 vote too.

Skins 3
hey hey, i only tell you what i see

Skins 5
ok, well if it has a purpose I guess, I just hate hero glow.

Icons 1 Skins 4 Maps 1
You should show both a team colored and a neutral hostile so that you can compare them, see the detail, and see team color. I like this skin.

Skins 9
Could you make a fitting icon for this skin?
The normal Demon Hunter icon looks bad with this.
This skin is really great, 5/5 points.

Icons 2 Maps 3 Spells 1
it really depends on what kind of map you're doing whether hero glow is good or not...almost all the time, hero glow is good. but there are a lot of times where it's better without it. typically when that's the case, it usually also means that you don't even want team color. without team color also automatically takes away the hero glow.

without team color is good for looking at the units better, seeing how pretty they are and all that, which is great...but anyway there are a lot of units that have no or little team color, and plenty of "heroes" that don't have hero glow and sometimes don't have much team color, those are really annoying and even some are in dota like that which are a pain to play against... anyway i'm kindof rambling but this is a great skin.

i found a darth revan icon and a model for him too lol but no darth bandon icon so far. i guess for now i'll use dreadlord icon. in the meantime i guess i'll add both siths to my map lol.

Spells 1 Tutorials 1
Great skin. May I have permission to use in my map?
As always, promise to give credits and a +rep.
I will obviously rate this perfect skin a 5/5. Good Job!

Awsome !That's great now we got another character wielding twin blades other than Illidan/the demon hunter. Good job .And you did well on changing the icon on his blades.

Models 5 Icons 5 StarCraft II Resources 1
Great!
You must log in or register to reply here.