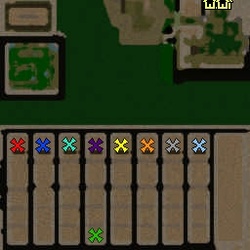 (1) Pick a hero
(2) Race to bottom of your row while fighting creeps along the way.
(3) There are four levels of creeps, each with its own boss creep that get harder each level.
(4) Every few minutes there is a duel
(5) Race to last boss and have fun.

---Credits to HiveWorkshop.com for models-----

DL THIS IT IS VERY FUN AND IF U TRY IT U WILL LIKE IT!!!!
Up my reputation if you like this plz