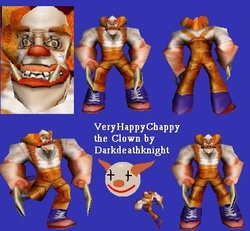 It's been a LOONG time since I have submitted a skin.
Anyway, this is Happy Chappy the Clown. He is one happy chap.
Happy Chappy has claws which can't be removed by texture, and he has bad wrap on the Hair. One of Happy Chappy's feet has a wierd wrap, which also can't be fixed.
Finally, Happy Chappy doesn't mind if you criticize him, but only if its constructive.
Because of Happy Chappy I had to type on Google "Orange Overalls". I wonder what my internet providers are thinking.
Face is based on this image. 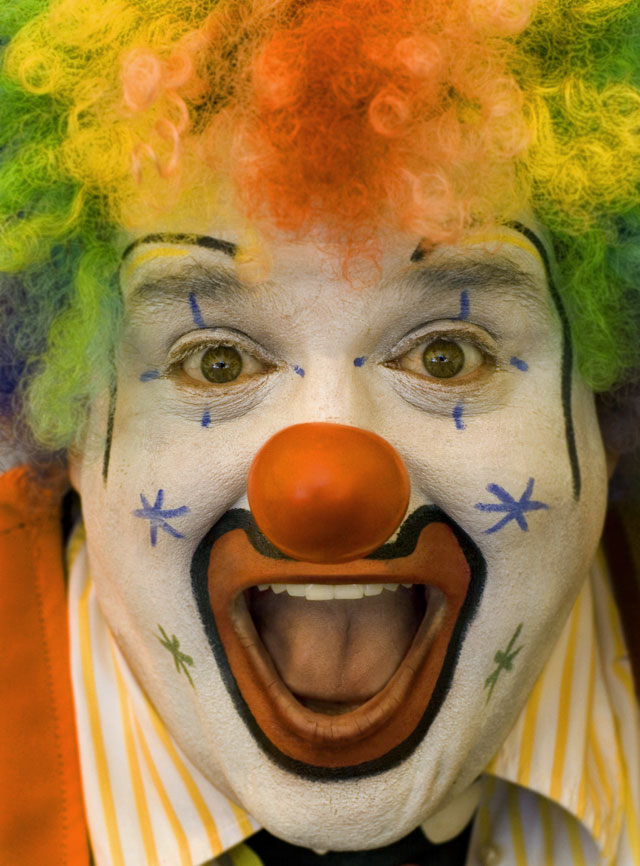 And the rest is my imagination.
Inspired by the hair on the Chaos Ranged Orc (I don't know its real name)
Now before you say, WTF. This is so stupid as it has no use, think about how many Warcraft maps have a clown in it. NONE. So this city need a new class o' Clown...and I'm gonna give it to 'em.
Side Note: Bob Marley is now Che Guevara.

UPDATED-
Okay I did some shading, Hopefully thats enough, and worked really hard on the highlights of the face (let's hope your satisfied Shiik cos I am!). I put some hair on the arms to make it less scary. Finally, I changed the shoes to two colours, and did not make them PVC. If you don't like the colour of the boots just say so I can change it.
Also please don't accept this until its Reccommended or higher.
UPDATE- I did even more shading. If you want more shading I will not know what to do. I did more crap on the face, now all wrinkles are pretty much brown.
I also did more highlights to make muscle which I'm not too happy about, as the overalls were supposed to have a loose look, now they look like tight clothes. Also, I can't make the eyeballs look like "eyeballs" because the actual model goes in for some reason, but I tried as best as possible. I hope people like this.

Moderator
15:00, 15th Apr 2011 shiiK: Cleaning up skins that have been rejected (until updated) for more than a month - moving to rejected permanently due lack of updates since last moderation. No new review of the skin has been made. If you feel that this...
Read full review...
Reputation Statistics
Page 1 of 2
Show Ignored Content
Page 1 of 2