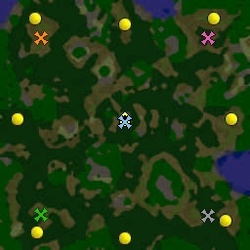 This is Godfall 2, well an early version, me and mechanical man decided to release it because were doing some large changes.
Godfall 2 features a battalion system like its previous title but now it includes a new crew´d artilery system along with a new base building system.

This is only a multiplayer version and mechanical man did not wish to include the ai for it is incomplete and its hilariously easy to defeat. So unfortunatly no ai,for now

There are 4 playable races.
Human Empire, Wood Elves, Vampires and Drow which are fully functional and playable. All with new models including buildings.

For more information visit us at http://www.hiveworkshop.com/forums/godfall-chronicles-619/

here are some really early videos with sadly debug messages sorry about that but it might give you some further insight into the game.