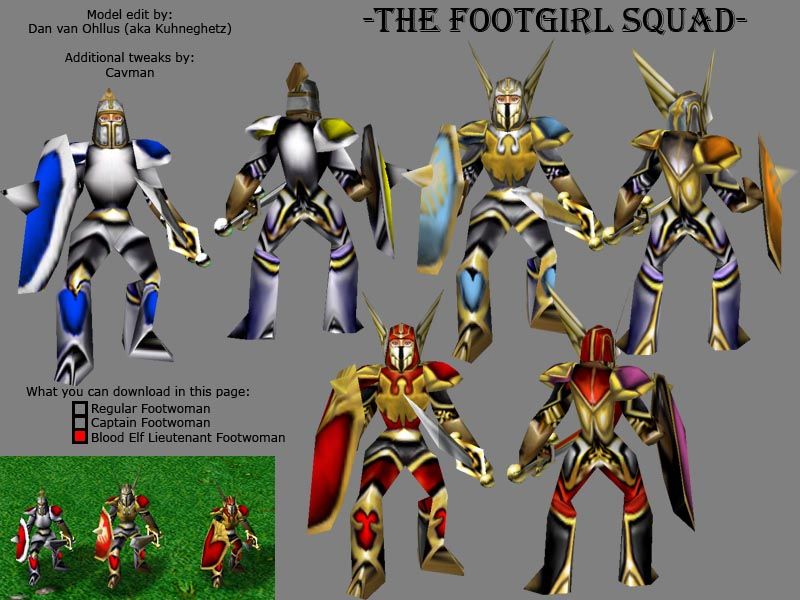 This bundle is marked as approved. It works and satisfies the submission rules.
View usage Statistics Legacy download
Reactions: Azotamentes, dorimor and deepstrasz
Made by Dan van Ohllus (aka Kuhneghetz)
Additional tweaks by Cavman

Description:
What else can I say that she is a female version of the Blood Elf Lieutenant?

Base model is the Demoness with transfered animations from the Footman, plus some extras (like Attack Slam for a shield bash ability and Dissipate for used if the unit will be a hero).
External portrait model is included if you wish to make the character move her head when she talks, though you can (if you want) still use the built-in non-talking version for file size or if you use a custom footman texture that doesn't fit on the external portrait very well.

UPDATE:
Cavman was generous to give the model a new wrap on the back, made the balls billboarded and tweaked the animations on the sword.
And I have edited the proportions now to make her less thin.

Extra note:
Cavman was the first to come up with a feminine version, though he based directly on the Footman model (which is quite difficult to make it look feminine).
So I didn't come up with the idea first, but I was tempted to make my own version.


GIVE US CREDITS IF YOU USE THIS MODEL IN YOUR MAP!!!

Feel free to edit this model for your projects as long as you credit me and Cavman for the model you based it from.

Highly recommended for any female warrior, especially considering that she actually has armour on.

Models 4 Icons 52 Packs 2 Skins 30
Yes, it does looks more femalish than the past. Nice models Dan!

Models 121 Icons 104 Packs 3 Skins 8 Maps 1 Templates 1
UPDATE:
Cavman was generous to give the model a new wrap on the back, made the balls billboarded and tweaked the animations on the sword.
And I have edited the proportions now to make her less thin.

I kinda like it,its pretty clean.
But theyre wouldnt be many uses
3/5

Icons 19
Thanks for sharing

cool now all we need is a female knight +rep

Only difference I see is there lot skinnier and have female eyes... Give them teh boobies! lol

punwisp said:
Only difference I see is there lot skinnier and have female eyes... Give them teh boobies! lol
Click to expand...

lol i can agree half cuz it looks like men but not really also the thiness of the body shows it..

One thing to say: RESIZE THE BREASTS! Damn, what's wrong with you people?!
What is she, nine?!

I loved these models, specially the lieutenant. 4/5

Good moddeling but they should have the boobies!

Maps 4
It has a dissipate animation. What it still needs is a hero glow (I've read there are some workarounds with effects animation).
4/5.
But yeah, the chest armour isn't realistic. Actually, neither are the tight plates on her body.
You must log in or register to reply here.

[HD/Modeling] Can anyone change face to these models