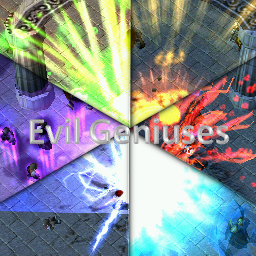 6 Evil Geniuses decide to leave their hometown and build an empire to take over the World!

This is a fast paced strategy map which find a spot on the map and build a base and
defeat your enemies using 6 unique technologies, over 30 items and over 50 units,
basically using either armies or superweapons.

-Superweapons
Firing time of superweapons usually are between 2-4 minutes and usually have a very large area (600-800) of effect.
Obviously, the longer charge time, the more powerful the effect will be.

-Armies
Armies consist of units, they can be manufactured from the Workshop, most of
them need to be piloted (usually by henchmen). You can upgrade Workshop to
Advanced Workshop to produce units that use your researched Technologies.

Units can also hold weapons when Weapon Attachments is researched,
weapons are items that passively and randomly attacks enemies around the holder.
Weapons can be made from the blacksmith.

Technologies are mainly based on elements, they are:
Frost, Fire, Lightning, Earth, Psychic and Biological
Each technology unlocks different buildings, units, weapons and superweapons you can make.
Each technology has 3 levels and there is no limit to how many technologies you can research.

However, you are not only against other players, the townspeople has deemed you a threat
and is out to eliminate you. There are other factions such as the Bandits that will
attack you if you attack them.