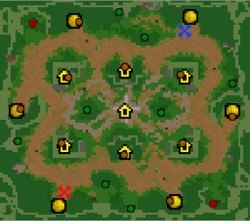 This is a remake of my older map Abandoned Fortress, which was temporarily played on w3arena and nwc3l, I think.
Abandoned Fortress - Liquipedia Warcraft Wiki
(Never uploaded it here though)

I've always felt like my maps from that time were a tad too small, so I started again from scratch. Both the map itself as well as the fortress in the center are now wider. The fortress has got one extra ramp in the north and south, and the ramps on the right and left side have been enlarged. There are two additional camps on that upper level. Note that the Goblin Labs are on the lower level though.

It's probably hard to get lost on this map, as the layout is really simple.
The screenshot with the creep routes is not perfectly logical as of yet. Meaning the colors could be improved.

I'm not sure about the red creep camps in the corners, generally. Any input on that is appreciated.

mafe
Well, I think this map is quite standard, which has both upsides and downsides. The upside is that I cant really find very minor questionable parts in the gameplay values: -Level 8 creepspots are kinda "toow strong for lvl 1 items, too weak for lvl 2...
Read full review...
Reputation Statistics
Show Ignored Content