Maps 10
I'm working on a map where I'm converting an area of terrain from one tileset (Outland) to another (Lorderon Summer). The trigger seems to work fine and the conversion happens as it should, but it results in one weird graphical bug.

Basically, the 'dirt' tiles ('dirt' and 'rough dirt') seem to sit 'on top' of the grass tiles, creating a really strange interface where the two meet.

I'd think this was a general problem with converting tiles, but that doesn't seem to be the case, as the 'dark grass' and 'grass' tiles meet and overlap just how you'd expect them to. 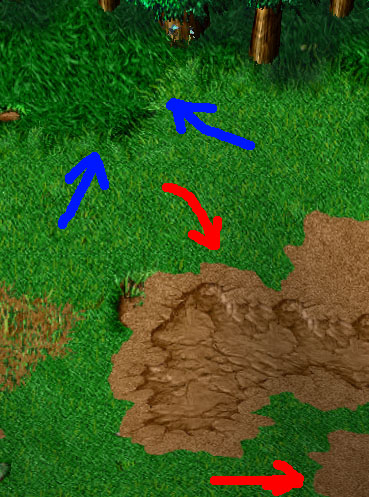 I've already tried changing the order in which tiles get converted (converting grass before dirt, then tried it the other way round, dirt before grass), but that didn't help.

Does anyone know anything about this and have any suggestions on how I could fix it?

Select the rough dirt tile and shift it left so it is on the left side of grass tiles.

Select the rough dirt tile and shift it left so it is on the left side of grass tiles.
Click to expand...

That doesn't actually work in this case, becasue the tileset for the rest of the map is Outland - so there's no grass tile to shift. I created the terrain in the screenshot by replacing existing Outland terrain with Lorderon Summer terrain tiles via triggers. That said, thank you for trying to help.

In the meantime I luckily managed to fix the problem after quite a while of fiddling with it. Splitting up the trigger that converts the terrain into several separate parts seems to have done the trick.

Could have been that the problem was caused by having a single trigger trying to carry out too many actions, or carrying them out in the wrong order somehow...
You must log in or register to reply here.