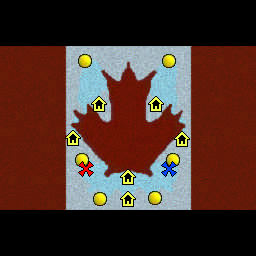 This bundle is marked as awaiting update. A staff member has requested changes to it before it can be approved.
View usage Statistics Legacy download
Reactions: deepstrasz
Hello,

Map a little crazy but I hope you find it fun!

Do not hesitate to give your opinions.

- Addition of two orange creep in the middle.

- Redesign of trees to fill in the holes. 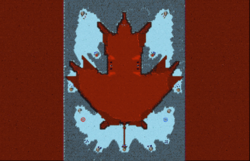 mafe
Let's see about my previous review: 1. Much better now. The lvl 4 charged from the 3xlvl5 salamanders and the lvl 4 permanent from the northern goldmines are still relatively strong itemdrops. 2. is fixed. 3. Transitions are still bugged in many...
Read full review...

Maps 10 Tutorials 1
I appreciate the idea, and the recreation of the canadian flag is really well done. Unfortunately, most of the other stuff is rather lacking:
1. Several itemdrops are either too strong/too weakt for some creeps.
2. Unreachable tavern until air units are available, why?
3. Transitions from ramps to regular cliffs are visuall bugged.
4. No fastexpansion possible.
5. Mercs bought at the eastern merc camp can become stuck.
6. Gaps between trees, paths between forests and some cliffs for no apparent reason.
7. Pathing blocker to prevent players from reaching the red stripes of the flag have gaps between them.

So... I know it's supposed to be a "fun" map, but I really think this map is very far away from being approvable. Maybe you can do some major updates to fix most of this stuff, but for example, you'd essentially have to delete and replace all the trees. You should exclusively place trees with the size 2 circular tool, and by single clicks (no dragging) so that new trees align perfectly with old trees. Anyway, map set to Awaiting Update, but just because I like flags and the canadian is one of my favorites

Maps 10 Tutorials 1
Let's see about my previous review:
1. Much better now. The lvl 4 charged from the 3xlvl5 salamanders and the lvl 4 permanent from the northern goldmines are still relatively strong itemdrops.
2. is fixed.
3. Transitions are still bugged in many places.
4. Fastexpansions are possible now, but the creeps are on camp stance. At least one of them should ont be (and possibly placed further back as a consequence).
5. is fixed.
6. is not completely fixed, but significantly improved.
7. Pathing blockers are fixed. However it is possible to build a main building next ot the pathing blockers and use a scroll of town portal to get on the other side of the blockers. I dont think it will be abused in a friendly game, but it still could be fixed by adding more blockers.

Newly found:
8. At the shop a single hero can sneak around on the west side of the creeps to buy items without aggroing the creeps.

So actually I'd like the see some further improvements. You can also contact me on discord if you have any questions. Map set to Awaiting Update again.
You must log in or register to reply here.

Rise of the Lich King Reanimated 1.0