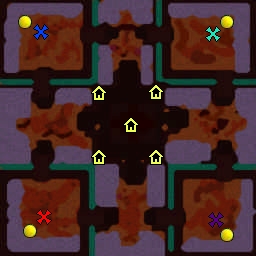 abgm;2358359 said:
With all respect and companionship
im surprised, by seeing this

because you were at two steps of making this melee approved, and you have two simple ways
-reduce the numer of players to 2 vs player map
- or the best for me i think: you have 4 mobs defending nothing, if you put the gold mines there, done, map approved

the principal problem of your map was, as melee, it hasnt expanding gold mines options, and in melee thats almost death sentence, even my experimental map the ship of doom has goldmines to expand.


i think a map should be approved as melee first , and later, upgrade to altered melee. thats why is very common, in altered melee, use blizzard maps.

as melee, it was rejected
and as alterd melee, you only worked in the orc race, and not all units, in general in altered melee, is usual to change the 4 races
with the undead is very easy to change the models and make a fel race

so no melee aproved, orcs changed but not all units, skills the same, no AI scriptig touched...
this one has future as a melee increasing the goldmines and improving the creeps of the center, but as an altered melee, in dont see it.

i hope my comments helps you to improve
Click to expand...

Oho Fel orcs
I like it
Chaos Taurens man
You must log in or register to reply here.