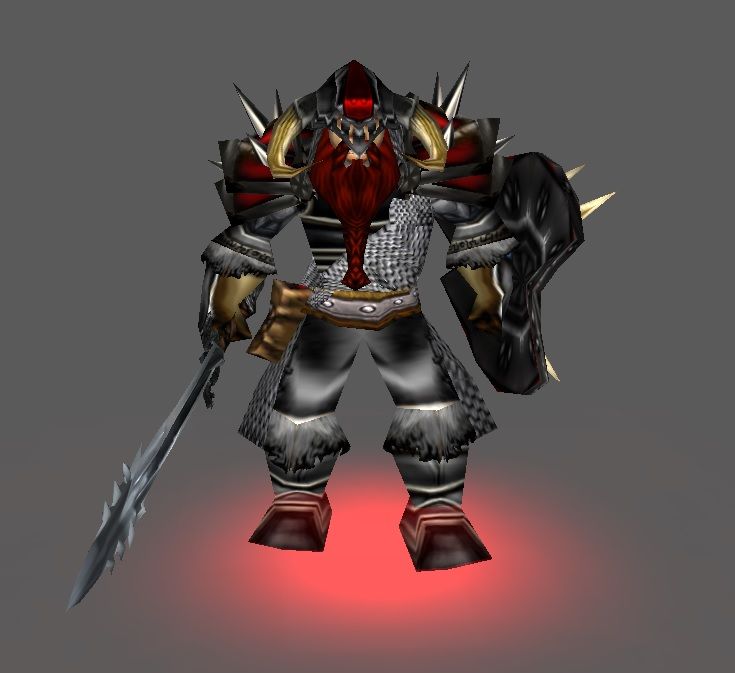 This bundle is marked as approved. It works and satisfies the submission rules.
View usage Statistics Legacy download
Reactions: InfernalTater, Skipper, Sorvaltis and 8 others
Hello again. So... Here is one special model, out of two. This is vrykul thane.

It is based on wow animations from vrykul male, so credits goes to Blizzard Entertainment for original resource. I made only mesh, wrap, effects and animations edit. I dont want take credits fro esomething I have not done. i dont wanna make all my future models based only on alternated wow animations - nope. Only sometimes I will borrow some of them, that will be harder for me to create as custom.

Also made custom portrait - not based on wow animations, this time W3 themed.

Anyway, enjoy and give credits. (Hope you will enjoy using this ingame textures)


Hopefuly finaly fixed, just tested it ingame. I finaly foudn how to fix this stupid bug...again

Updated as suggested by Misha and problems should be really fixed now properly.

Updated again: Problems wat not with the resizing, problems was that i added bad coordinates to the attachments, thats why it was so wrong. I tested them now ingame and it should be fine. Even so, some attachments are not so needed I guess, I let them unremoved. And also I added one attachment more - weapon, which is used most in the games (for orbs). Lets hope this is lat update.

'dissipate' anim doesn't have him go high enough, or slow enough. 'weapon' attachment isn't on the sword, 'origin' and maybe 'overhead' didn't shrink with the model, so they remain huge, same with collision (has no collision shape). the health bar is somewhat high over him.. but, it performs well

EDIT 2: Health bar is now okay, but the attachments are screwed now. Resizing via bones is gonna give you a very, very bad time.

EDIT 3: Auras and origin based attachments seem a tad small now, but I'll approve this.

Models 12
finally...all this epic models come out for us . well done ! good job
and the chainmail should use the material with "transparent" not ' blend '
and 5/5 rating

Just checked it out in game, and it looks great. The Hive model viewer will incorrectly make parts of the shoulders disappear, but it doesn't happen in game.

Way to go on this guy. A fitting Vrykul hero in heavy armor. Thanks again!

Well the Ymirjar is far from over...I need t fix him... He has some strange animations problem with anatomy fails and so on. I definitely want to make him better. Right now he is not approvable in my opinion.

Models 35 Icons 3 Packs 1 Skins 1 Tutorials 1
Absolutely fantastic use of in-game textures, again you nailed it and really made it look like something completely different from any current human unit in the game.

Models 3 Icons 65 Packs 3 Skins 27 Templates 3
Is the chain-mail still using blend texture option? 'cause i see the model through it.
Other than that cool model:>
Last edited: Jan 24, 2014

It could use a Defend animation though

Models 117 Icons 4 Packs 5 Skins 1
I know my work can be sometimes "lazy", meaning I can definitely make some models better.... But I just want to inform you all, that my priority is to enrich Hive model database. I knwo this model could have more animations like special spell animations and defend animations. Yet I hope its still quite useable in comparison to th ewuality of mesh and filesize. I am more or less testing workin with wow animations on this one and also using of ingame combination of textures. And also making custom mesh like swords shields, helmets and ...wel...beards There are some other models I am trying to put little bit more work into. I was little bit cryzw ith LOTr themed model lately...So I am working on Smaug and Balrog ( I am still a bit angry that no one made Balrog mode til now, so I have to do it on my own , its sucha wonderful beast)...

I also wanted to thank you all for helping me out with your comments and criticism. Without it my models would be just empty vehicles, robbed out of its very soul.

And the last one - I tryied some times before to quit with warcraft and modelling. And I have to say only one thing...ONCE YOU GO WARCRAFT, IT NEVER GOES BACK! not a chance I will ever stop modeling...I might slow down, take a pause, or rest for a while...But I will always keep coming back!

See ya fellaz! on the next model

Models 204 Packs 1 Maps 6
Glad to see this finally got approved.

what are numbers in object editor for animations?

AND make please! all attachments

Models 117 Icons 4 Packs 5 Skins 1
What the hell do you mean all attachments? 2 hands, 2 feet, chest, head, origins, overhead, weapon and shield is not enough?

Weird, when using him he appears as a Green and Black cube.

Models 28 Icons 27 Tools 1 Maps 5 User Interface 1
Have you remembered to remove the war3imported from the path in the import manager?
If you already did. Have you closed and reopened the editor?

Cake is a Lie

Cake is a Lie

Haha,that epic movie...Say,where's Grendel?
You must log in or register to reply here.

[Role Playing Game] Beowulf I: The Return of Loki

L
Souls of the Brave

[Picture] Warcraft vs Starcraft Zerg assault on Orc base. Many brave warriors have fallen but th