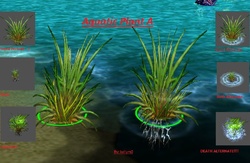 This is the 11th plant model I have uploaded, and the 16th model I have uploaded in total. this plant is the first in a series of plants that will be known as my ''Aquatic'' creations. that basically means it serves either as an amphibious plant, or as a primarily Aquatic water borne plant. this plant was a request by galactcus for a rice model designed for an Asian samurai/ninja type map, so its made to look like the rice plants when they are very young before they begin to flower and build the seed stalks, which basically resembles grass. because rice lives in patty fields, it usually exists in flood plains, so I built this plant to have both water rings, a second birth, and a second death built to look splashy, inspired by my ''PuddleItemWard''

the way to use this plant is to build one of 2 units in the object editor, if you want this model to act as a land based grass, you keep its animation tags normal, and rig its movement type to ''foot''

If how ever, you want it to have its naval animations, you give it the animation tag ''alternate'' under the unit data field called: ''Required Animation Names'' this unit will then require the movement type of ''float'' to act as a naval unit. I am aware of HappyTaurens ''Grassie'' model, so before you say why does this even need to exist allow me to explain the differences, HappyTaurens Grass model is a doodad, it wiggles in the wind, and is beautiful, it really is, I my self love it. my plant acts as a ward, it can be born, die, and wiggles on both land and sea. can be targetd with left click spells, right click actions, and it even splashes!

set death time seconds for which ever of the units you're using to 1.240 seconds for smooth particle transition in either death animation. In Addition, for those who wish to use this model as a doodad, and not a unit, but are wishing to use the naval animations, download and use the ''portrait'' file called

this does not have the basic land built animations. of chourse the easy way around that is to make the thing have the locust ability. still, its easier if I just do that for you =)

Gives credits and what not, feel free to edit it, just don't upload it any where. and have fun guys.

update 2: I forgot to mention the placement of attachment points.

foots and hands are in a square around the base in the front/back/and sides. origin is on its origin. and chest is slightly above that, head is about half way up inside the plant, and over head is above the top of the plant. this is the same configuration as all my other plants, but I had to update their locations a bit because of scaling. any way, if you want you're plant to have effects on it, experiment with the attachment points you like.

Keywords:
Plant, Grass, Shrub, Aquatic, Weed, Animated, we-want-no-zombies, on the lawn!.. we want, no zombies, on, the lawn!
Contents
Reviews