Alternate town halls and group invulnerability shields for a noob

So, I have a project I’m working on, a map for some friends and I, wherein two of us have largely reworked custom races...Dwarves and High Elves. As both have entirely separate tech trees and town hall structures, this has created a problem where the map reveals all our structures, not recognizing the town halls.

I’ve looked for this problem elsewhere. Apparently the offending element is the trigger that enforces the victory/defeat conditions, which specifies only the original town hall structures.

Now, I have two potential solutions. The first is to modify the original town hall, removing its ability to create human peasants, (I preserved the original human tech tree), maybe make it cheaper, and add it to the Elven and Dwarven build trees to prevent revelation. The second is to totally redo the victory/defeat conditions trigger. I have no idea how to do that last, but it is the preferred option. If someone could tell me how to do that, it would be welcome.

That pales in comparison to the second problem. I’m creating an item, stack of two, which when activated should apply total invulnerability to all friendly ground units nearby for four seconds. So far I’ve been able to apply a divine shield visual effect to all of them, but no more. I don’t think this is a matter for a trigger, but I’ve really no idea, and thus am asking about how to achieve this.

EDIT:
make sure to uncheck Initially On

[Edit]: I figured that bit out, but now after the units become invulnerable, which they now do successfully, they remain invulnerable forever. How do I fix that?
Last edited: Nov 10, 2018 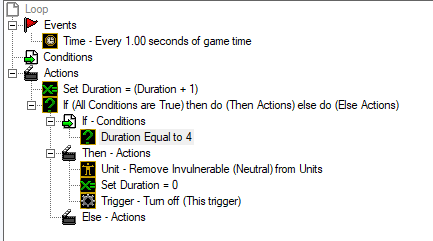 Spells 1
Neither of these solutions are MUI (won't work for multiple units simultaneously) but if that works for you then you can remove the need for counting up the duration in Aeryn's trigger by using a timer variable. Also there was a point leak in the second line of the first trigger that I've fixed.

I do need for multiple units to be able to be under the effect, though I do not need the effect to be able to trigger multiple times simultaneously. So if that is as the trigger works, then good...I’ll be trying the updated version tonight and I’ll tell you guys how it goes...but if MUI is required to achieve that effect, then it may not work.
Stay tuned for the update by tomorrow.

Alright, it was a success, but only on a single unit in the group. This ability does need to be able to affect multiple units with a single cast at the same time.

[EDIT]: To clarify, the whole group became invulnerable, but only one unit returned to normal.
Last edited: Nov 14, 2018

Sure. Individual line or variable specifics are available as needed.

Tutorials 1
You need to declare picked unit variable in the second trigger again.

Ahah! It is now successful in its entirety! You have my most profound gratitude, Aeryn, Pyrogasm, and also Doomhammer!
Now, I don't suppose the former question on town halls has a simpler answer, does it?

Tutorials 1
I recommend you to check this tutorial How to: Create a Full-working Custom Race

About the spell, if more than 1 unit cast it at the same time, it wont work.

Aeryn said:
I recommend you to check this tutorial How to: Create a Full-working Custom Race

About the spell, if more than 1 unit cast it at the same time, it wont work.
Click to expand...

That's fine, I don't want it to be cast often in the first place, much less multiple times simultaneously. Thanks for the tutorial! I do believe this whole problem/question has now reached a satisfactory result.
You must log in or register to reply here.
Share:
Reddit Pinterest Tumblr WhatsApp Email Share Link
Top