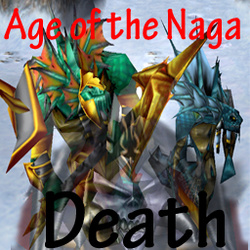 Its a mix between old school Vamp and hunters vs farmers


Players: 12 players recommended
(with one naga he can control both
in case of leavers)

People:
You have to build up a defence with good walls (remember to repair) and many towers. You have to kill the naga fighter before the time is up. So its wise to get a strong hero and many warriors in the end (kill some peasants for food)

Nagas:
Stay alive and try to kill as many humans as possible. In the end go and hide and try to stay alive when the people come for revenge