A Haunting Demo A2 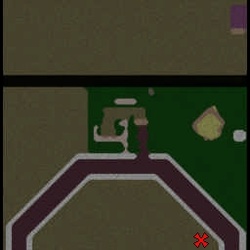 Story
2 Months ago, a family living in Perth, Western Australia, were mysteriously found dead inside they're large home. They had weird satanic markings on their bodies, the mother and father seemed as if they killed themselves, one had a knife, and the other had a razor blade. The couple had a 7 year old boy, who was found dead in the attic. No-one knows how he got there because the manhole in the ceiling looked as if it was sealed for years until police broke it open due to a horrific smell. The police had investigated the residents families, each one said that their relationship was as good as ever, they never fought at all. No-one really knows why they killed themselves, but no-one can tell what the satanic signs stand for either. The area around the house is now abandoned due to unusual activity coming from the house. Before it became abandoned, paranormal investigators questioned the people who work near to the house. The Librarian, Miss Bransteen, told investigators of screams and cries from the now-empty house, no-one is there and she has become paranoid of these sounds, they moved the library further into the city to get away from the house, which she states is cursed. There is also a small medical facility next to the library, the lady at the desk said that patients have been leaving due to blood curdling screams that seem as if its coming from inside the facility, but she said its coming from the house. The medical facility recently moved as well.

A couple of paranormal investigators have gone through the house with cameras in the middle of the night, but hours later they have all ran out of the house, terrified out of their minds, some have even been injured by either being pushed to the floor, or bitten by something unknown.. They now have a website that has warnings to not enter this house.

Now, a Demonologist read about the happenings in the house and feel that maybe he can release what ever has "occupied" the house.


Puzzle Solving
During the game, you will stumble upon things that the police never found, May these could be clues to what is inside the house and how to get rid of it, once and for all.


Sound Effects
The main part of the game is the sounds, there isn't anything scarier than complete silence then a sudden scream, cry or bang. a lot of sounds during the map will be completely random, no one knows when it will go off, or if it ever will...


Camera Angles
With Resident Evil style cameras, this can add to the suspense and horror of the map, Show off Specific points and Areas of Interest.


Arrow-Key Movement
The movement system is using the Up, Down, Left and Right arrow keys.

Demo A2
- Fixed a Major bug which allowed Users to enter the Attic with only the 'Games Room Key' and 'Front Door Key'.
- Fixed a Minor bug where upon exiting the house and into the backyard, you would become miniature. upon re-entering, you would retain the miniature size.