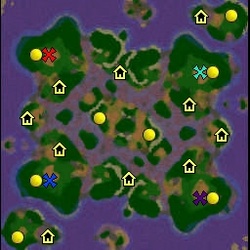 Moderator
23:09, 28th Jun 2015 This melee map has become approvable. It is quite unique in its type since it provides a challenging gameplay because of the 2 expansion gold mines for 4 players and since it offers walls which are a way to build defenses. Item...
Read full review...
Reputation Statistics
Show Ignored Content