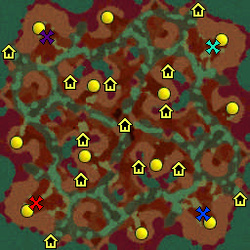 Map Description:
In this refined land the fiend began to show their bloodlust and eat every life that pass by. better be careful they are very dangerous!

Information:
-Map have a large size [144x144]
-present new creep camp with only fiend, and other non-standard units.
-easy to predicted where enemy creep [left-right early game and late game mid.]
-northern merc, allowed you to used most of the unbalance creep. to give an advantage to any weak race. Also present you early raise dead and blizzard. the main idea focus at the first nerubian that spawn 2 spider when she died which give the best benefit if compare with any other camp.
-lv3 route by going left or right straight to mines else two orange camp near you.
-many green camp exist in case of FFA give you more choice.


1.0 release on central melee discord
1.01 fixed some camp[switching], and up mid red camp from lv20 > lv22 with per5 [people say it was too easy]
Creator Note:
-I feel like I mess up with terrain a little, (4)Refined Land look better. Also the map is a bit too big but it good to go with northern merc. More space to run away from blizzard revenant[chance].
Previews