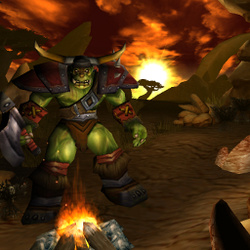 Orc Campaign: The Invasion of Kalimdor
Chapter 3: Cry of the Warsong

(Interlude)
"Meanwhile... Back in Lordaeron, the Burning Legion commences its invasion..."

(Level)
"Five days later, near the foothills of the Stonetalon Mountains..."

Level Description: As Thrall heads to the north to find the oracle, he finally encounters the Warsong Clan, but they are in battle with humans who have also fled to Kalimdor. Thrall orders Grom to leave the humans alone and help him get the zeppelins he needs, but Grom disobeys.