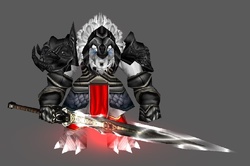 "From the pieces dark sarone the new weapon was created - the Lance of Freezing Death." The new leader of the worgen deathknight held the weapon proudly to defend his beloved kingdom of Gilneas. Behold the Shadowfur...

Two sides fixed.Now added blue shiny eyes. So new armor added and also little bit retextured with detailed armor of detahknight. So i hope this is the final versionm of model. Soon i will create portrait.Sound of death changed for Rider death and footprints also changed fopr paws.

Another Update. So new skin as you see. Not mine ots Mr. Goblins http://www.hiveworkshop.com/forums/skins-552/whitewolfs-blp-115173/?prev=search%3Dwolf%26d%3Dlist%26r%3D20 white wolf skin. But i have permission for that, i have spoken with Mr. Goblin and he agreed. Maybe i will change weapon, but its just "maybe" because i dont think this weapon is bad. And also - filesize rapidly decreased .