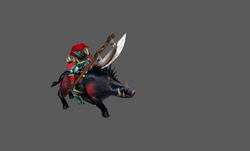 This is another ill-reputed, quite feared Troll unit. A brutal, infamous Troll Warrior Mounting a fiercy boar. The Boar Riders, or nicknamed ''Hoggers'' are the most feared Troll cavalry after the Shark Riders and battle turtles. Unlike the raptor rider or orcish wolf riders, the ''Hoggers'' don't only raid and feast on cattle. They also let their ever-hungry mounts feast and ruin crops and fields as well, which makes them to terrible raiders. Unlike shark or raptor riders, boar riders occur at almost any continent of Azeroth without having trouble with cold weather or icy waters. The cold-blooded raptors can't operate that well in cold places, unlike the well-fitted boars. Troll Boar Riders are wandering & raiding at many places. Another difference is their lack of belonging to a tribe or following certain cults. They're just live like free maurodeurs in almost any place. They're commonly used as mercenaries, whereas they've been seen in Outland as well.
This is the standard boar rider, a slightly armored Troll with a halberd and a war-painted boar. It's a pretty fast moving, medium armored cavalry unit, that is best used for pillaging villages, raiding unguarded bases and for destroying enemy concentrations in forests, where huge formations are next to impossible. Boars are also considerably heavier-built than wolves, which makes them more resistant and allows stampeding enemy infantry, even pikemen with lower risks than usual cavalry. Only a handfull of ground units can take them down.